Jimmy Kimmel in his opening monologue at the 90th Academy Awards remarked:

“…and thanks to Guillermo, we will always remember this year as the year men screwed up so badly women started dating fish.”

He was, of course, referring to Guillermo del Toro and The Shape of Water. Guillermo later won the prestigious achievement in Directing for same movie which also went home with the coveted Best Picture.

The Shape of Water is, of course, a very enjoyable film. I mean, it’s not every day that a fishoid has carnal knowledge of a human.

(Hang on! There was the fishy business between Tom Hanks and a mermaid. What was that movie again? Splash, right! But at least then the mermaid was hot.)

But here’s the thing. The Shape of Water grossed a measly $126.4m at the worldwide box office.

The only nominee for Best Picture that made the top 30 was Dunkirk, coming in at 18. 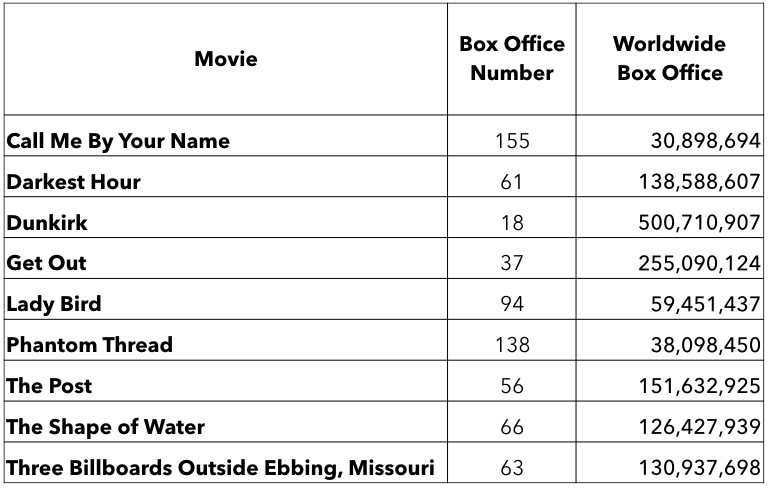 To the Academy Awards then, box office success (and by extension, mass enjoyability) counts for nothing in Oscar success.

That is a pile of baloney.

How could Fate of The Furious, Thor: Ragnarok, or Wonder Woman not get a look-in at the Oscars? Half of the planet enjoyed those movies! I mean, who knew Hulk had a bruisable ego and that Diana Prince had never seen a penis?

It’s shocking prejudice by the Academy members. So much so that Jimmy Kimmel wryly remarked:

“Quick update. Since the show started 47 minutes ago, Black Panther made another $48m. They are saying that Black Panther has been so successful at the box office, they are already saying it’s the favourite to not get nominated for anything next year.”

La La Land! I slept through that movie!

The winner of Best Picture last year was Moonlight. The movie was soul-rending boring I won’t be surprised if the director slept through the shoot too. No reason for Mahershala Ali to have won Best Supporting Actor. Dev Patel was more brilliant in Lion.

Having produced a gazillion advertising, I understand the need for artistry and craft. A poor story like, er, Biutiful can be made beautiful in the hands of a skilled director and actors. Yes, craft can just about save the day.

But craft without audience perspective is nonsense. Movies are made for movie-goers and not for Academy members. We pay the money. We deserve a say.

Take, say the 10 highest-grossing movies of the appropriate calendar and rate them on Picture, Directing, Screenplay and Actors. One winner will emerge – The Best Box Office.

That would be great, wouldn’t it? Maybe declining Oscars viewership will be arrested, and maybe even turn a positive number. Maybe the Oscars will be able to charge same rate as the Super Bowl for TV spots.

Below are the Oscars Best Picture winners since 2000. Which is your favorite?

(Out of the lot, Birdman is the only one I haven’t seen, so can’t comment on it)