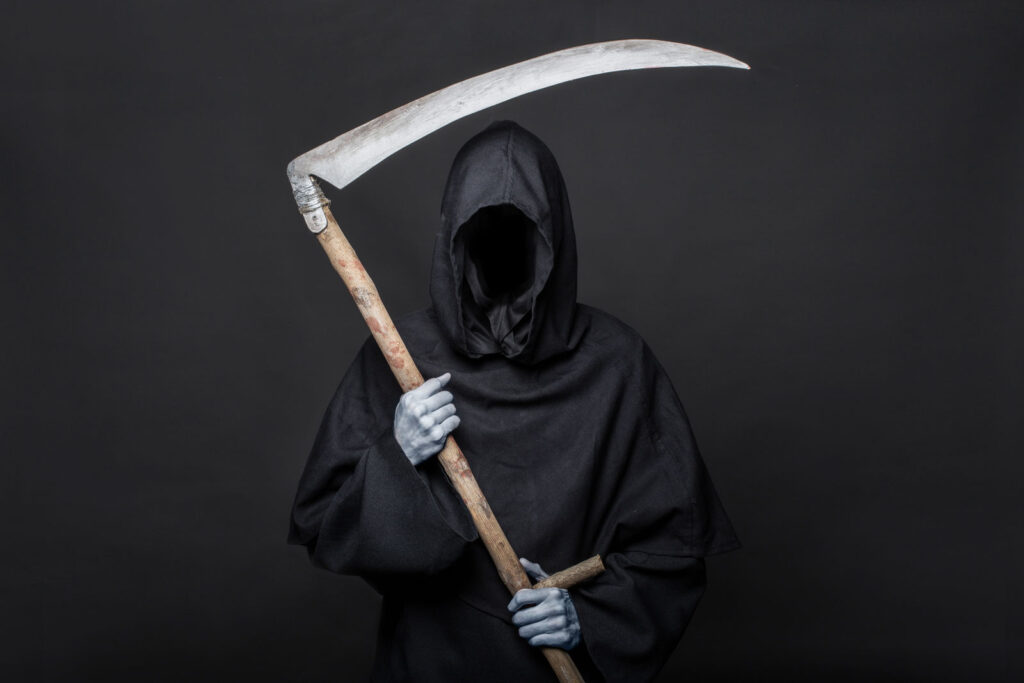 I don’t know about you but I enjoy dwelling in the land of the living. I’d rather not die. But that matter was long decided for me in a garden. It’s what happens when you stop to chit-chat with a snake. Your boyfriend was right there naked and you stopped to tattle with a snake. Not that I hold a grudge.

It’s a snake, for Pete’s sake!

But I’ve moved on. No point crying over spilt milk. Especially when the milk was mine. Especially when someone else spilt it. No, it doesn’t matter that I had the kettle on and the biscuits laid out. Not that I hold a grudge.

So, we are all going to die. No Fountain of Youth. No elixir against carking it. As I cannot, therefore, escape joining the choir eternal one day, I often contemplate the manner of my expiry. How will I die?

Will my death be quick, the phalanges of The Grim scything body from soul in one clean swing? A fatal car accident. A bullet to the head. Death without the chance to say goodbye.

Or will The Grim be devious and cut to the quick, but with the chance to put my affairs in order? Like cancer or ALS. Or will he discard the cloak and the scythe? Turn into a benign Angel of Death and rock me to eternal sleep. A coma. Or dying in my sleep.

There you go again, Jide, thinking these morbid thoughts.

I can’t help myself. Of all the things I’ve lost, I miss my mind the most. But rest assured that I regard death and dying a serious matter.

I am, of course, a Christian. I believe in judgment after death. In heaven and hell. I believe that after I have cashed in my chips, I will appear before the heavenly host. Before whom my life will be played back in Full HD.

This is why I find it ironic many believe that their dearly departed are in a “better place.” If you are a Christian and believe in the inerrancy of the Bible, then you know that not everybody who dies is in a “better place.” There is such a thing as judgment and recompense. Actions and consequences. I don’t know what happened to Herr Hitler or Comrade Stalin in their final moments, but I’d be mad as hell to see them snug in Abraham’s bosom. I’d pull Pete aside and demand an explanation.

So, about that day. When I appear before the host and my life played back in 8K. Will the play back make for a pleasant and enjoyable viewing? Popcorn, hooting and a rousing applause at the end?

Well done, good and faithful servant! Come and share in your master’s happiness.

Or will they cower at the horror show before them and look at me aghast?

Hey, Old Nick, one of yours I believe…

The possibility of spending eternity in the smoking section is hair-raising. That is why a slow death, even if painful, has an appeal. You get a second chance to make good with your maker.

A notion no doubt chagrining to the millions of Jews killed by Nazis in death camps.

I visited the Auschwitz-Birkenau death camp in 2019. It was the most harrowing place I’d ever visited. I tell myself I could still smell death in the air. My eyes misted at the sight of the empty canisters of the Zyklon B pesticides used in gassing the prisoners to death. I could still hear their screams as they banged and scratched on the door, the deathly fumes asphyxiating them.

I was traumatised when I saw the lab in which Josef Mengele, the “The Angel of Death”, performed his diabolic experiments on the prisoners. He was particularly fond of Jewish twins. He would inject dyes into their eyes — while they were alive — to see if the iris would change colour. Sometimes he would dissect them. Death at Auschwitz was slow.

Will I die a peaceful or agonising death? Only God knows.

As you would have guessed, I have not died before. But I like to think that the last thing on a mind in a slow and torturous death is anything but surviving. Our genes for self-preservation kick in and we fight for life. Think drowning man. Think straw. But still, a half-chance is better than no chance.

I am of course aware that many people are not religious, let alone subscribe to the Christian faith and its notion of heaven and hell. But no one believes they are going to Valhalla, Asgard or Sugar Candy Mountain, do they?

My father was rocked to sleep. He died a quick and painless death. No chance to say goodbye.

He’d been feeling poorly and decided to go to the hospital. It was nothing serious. A cough. A weakness in the joints. He was 71 years old and only needed to see the doctor. So he went to the hospital with my mom.

At the hospital, he realised he forgot to bring along his hospital card. The card was needed to pull up his records.

The house was a shouting distance from the hospital so my mother volunteered to go back home and get the card.

When she returned a few minutes later, my dad was dead.

He had died in his seat in the waiting area. He leaned his head against the wall and was gone. Everyone thought he was sleeping.

I am the first of five children. I got the call a few minutes after he’d died. It was on a Monday morning and I was at the office. A male voice came on the phone.

No. Not if I owe you money.

He mentioned his name. He was the doctor. It was a small privately-run hospital. He started to say something but my mother came on the line. She had snatched the phone from him. She was hysterical and incoherent. I only caught “bàbà é ti kù!” (Yoruba language for “your father has died!”).

I asked her to calm down. But unlike the meme, she couldn’t keep calm. She kept blurting my father’s name. The doctor came on the line and gave me the address of the hospital.

I drove to the hospital in a daze. Three of my father’s friends were already there.

My mother clung to me and sobbed. If only she had not left him alone! If only she’d been more sensitive. If only…

The body was released to me to take to the morgue. The hospital didn’t have an ambulance at hand.

We put the body in the back seat of my car in a sitting position. Two of his friends sat on either side of him. My father’s head was slung to the side. He looked like he was snoozing. Yet he was dead. It was unearthly. As I drove to the morgue, I kept looking at him in the back mirror. Hoping he would wake up. Hoping it was all a dream.

Thanks, man. That was sure comforting.

But his words stuck with me. The appeal of a quick, painless death.

Those words would re-echo last year when my friend died of Amyotrophic Lateral Sclerosis (ALS).

Right before my eyes, he withered, his motor neurons and muscles atrophying. I witnessed the degeneration of his muscle movement. First the speech. Then swallowing. Then walking. I saw the huge burden his sickness placed on his frail wife and on his 10- and 8-year-old sons. They grew into adults overnight.

He had always invited me to his hometown at Christmas to savour some choice bushmeat and palm wine. When I finally went, it was to bury his body.

See you finally came visiting. Told you the bushmeat was scrummy.

The words of my father’s friend would re-echo when my sister died during childbirth and was buried with the unborn child. I was there when they cut her open and brought out the lifeless baby to be interred with her.

Those words would re-echo seeing my father-in-law vibrate uncontrollably from Parkinson’s disease. Weeks ago, he was so distressed, he expressed his desire to die and be rid of the affliction. My wife and sister cried.

I am 47 years old. How will I die? A thousand cuts or rocked to sleep?

A quick and peaceful death is awesome if you are certain of where you’ll be spending eternity. But if you are unsure, you might want to be poured out slowly. Painless, I hope.

“When Jacob had finished giving instructions to his sons, he drew his feet up into the bed, breathed his last and was gathered to his people.” — Gen 49: 33

NB: This post was written for the Medium Writers Challenge with the tag of “Death.”