Picture this. You are on your bed in your boxers. The mood is right. Barry White’s deep sensuous voice comes up on the HomePod. Telling you this. Telling you that. Or maybe Joe is your thing. Or Ed Sheeran. The room is chilled by the air conditioner. The lights are dimmed. Your bonnie lass is in the bathroom. You can smell her fragrance. She comes into the bedroom in a towel. She drops the towel as she walks towards you.

Then your eye catches something in the corner of the room. A silhouette. A male figure seated in the armchair with a glass in his hands. You jump up from the bed in panic and switch on the lights. It’s the landlord.

You are shocked and furious. You shout at him to get the hell out of your room. Out of your apartment. He smiles and says no can do. He has the right to be there. You agreed to his presence when you rented the house. It was in the fine prints. But you didn’t bother to read it. Like the last tenant. And the one before him. And the one before that. All tenants really. But if you are adamant he should leave the room, he will. You’ll only have to move out of the apartment and forfeit your rent. It’s in the contract. In the fine prints.

He pours himself another drink and waits on your decision. He smiles at you the way I imagine a lecher would.

The story above is, of course, a sordid metaphor. An over-dramatization of Facebook’s tracking activities. But you did grant Facebook a front-row seat to your private life when you installed the app on your phone. You didn’t know you did. But you did.

Now, why does Facebook track you across apps and websites?

Why, to know you better, of course!

You see, Facebook’s business is selling targeted advertising. That’s how it makes money. It makes some $86 billion annually selling these targeted ads. Targeted ads are personalized advertising delivered to you based on the data companies like Facebook and Google collect about you. They collect these troves of data about you so they can have a good picture of who you are. That picture is important to advertisers and data brokers who need to reach a specified audience. That, after all, is the vaunted advantage of digital media over traditional media.

These gems of personal bits are not all necessarily available on the Facebook app. There are a lot more things you do on your phone than just scroll through Facebook. You read the news. You play games. You window-shop. You buy stuff. You watch YouTube. You take pictures. You live for the ‘gram. By following you across apps and the internet, Facebook is able to piece together all these activities and paint your demographic and psychographic portrait. Ergo, nail you down to your needs and wants. If you’ve been checking out websites on how to emigrate to Canada, don’t be surprised if Facebook serves you ads on emigration services to Saskatchewan.

So, if you are playing with your side chick’s phone and you start seeing Facebook ads for baby food and diapers, congratulations homie! Facebook probably knows something you don’t.

The depth of information Facebook collects about you may be disconcerting. But all ad-based tech companies track you across apps and websites. Google does it. So do Amazon, Instagram (Facebook Inc), Twitter or Yahoo. If they sell ads, they probably track you. That is the cost you pay for using the apps for free. Like many people, you didn’t read the Facebook privacy policy or terms. Nobody reads those. But that’s where the bodies are buried. Where you consented to be tracked.

So, what is the feud between Facebook and Apple all about?

Starting with iOS 14.5, Apple will introduce a feature called App Tracking Transparency or ATT. ATT requires users (you) to give permissions to apps before they can track you across apps and websites.

With ATT, when you launch any app for the first time, you will see a pop-up that informs you that an app wants to track you across platforms. The pop-up will explain what the tracker is and asks whether you want to approve or reject the tracking and sharing of your data.

One of Apple’s brand promises is privacy. The iPhone is supposed to be iron-clad. So iron-clad that Apple itself claims it cannot unlock an iPhone encrypted by the user. The FBI found that out the hard way. Thus, from a consumer and marketing perspective, offering iPhone users ATT is keeping with a brand promise. It helps deepen loyalty. It is good for business.

But not for Markie’s business. Mark Zuckerberg is outraged about App Tracking Transparency. ATT threatens Facebook’s nest egg. When users opt out of being tracked, it means Facebook’s ability to paint a portrait of the user is affected. There’ll be gaps in the picture. A nose missing. One ear missing. Maybe three teeth lost. That is bad for targeted advertising. Bad for Facebook.

Facebook probably suspects that if users have the choice of turning off tracking, many would. I know I would. I don’t want some bot stalking me all over the internet. What happens in Vegas should stay in Vegas.

So Markie is pissed. So pissed he is calling Apple its biggest competitor. So pissed he is smearing Apple as an enemy of small businesses and the free internet in newspaper ads. He said Apple is using privacy as a justification to disadvantage Facebook.

Said Markie, “Apple has every incentive to use their dominant platform position to interfere with how our apps and other apps work, which they regularly do to preference their own.” 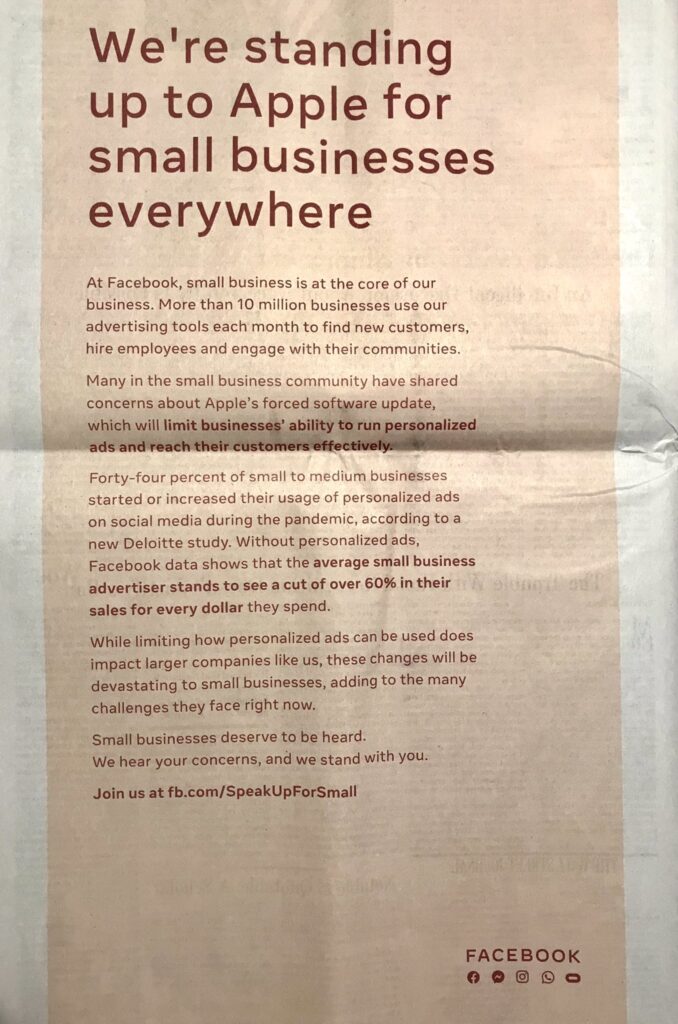 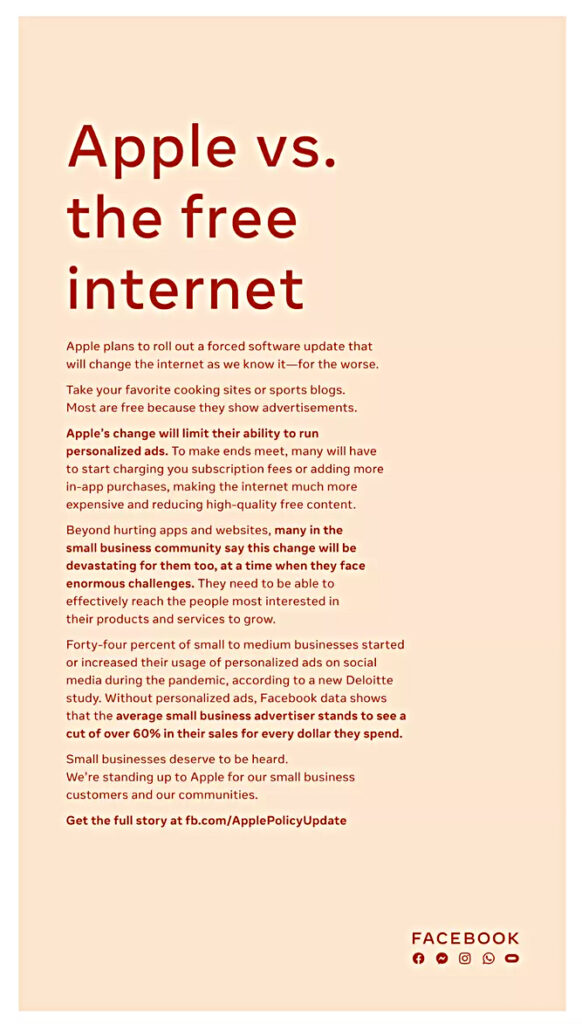 “If a business is built on misleading users, on data exploitation, on choices that are no choices at all, it does not deserve our praise. It deserves reform,” said Tim.

Whoa, those are some pretty strong words there, Tim!

However, Apple claims it is not asking Facebook and others not to track across apps and websites. It only requires them to asks permission from users before they do.

That’s like telling a thief to ask for your permission before he steals your car.

You may well ask why Facebook is worried about Apple’s ATT. After all, iOS is only 27% of mobile operating systems. Android rules the gamut.

Thing is, the bulk of Facebook’s $86 billion annual revenue comes from the US and Canada. iOS accounts for over 61% and 52% respectively of mobile operating systems in those two markets. Crucially, North America also happens to be the region with the highest Average Revenue per User (ARPU) for Facebook per the Statista data below. 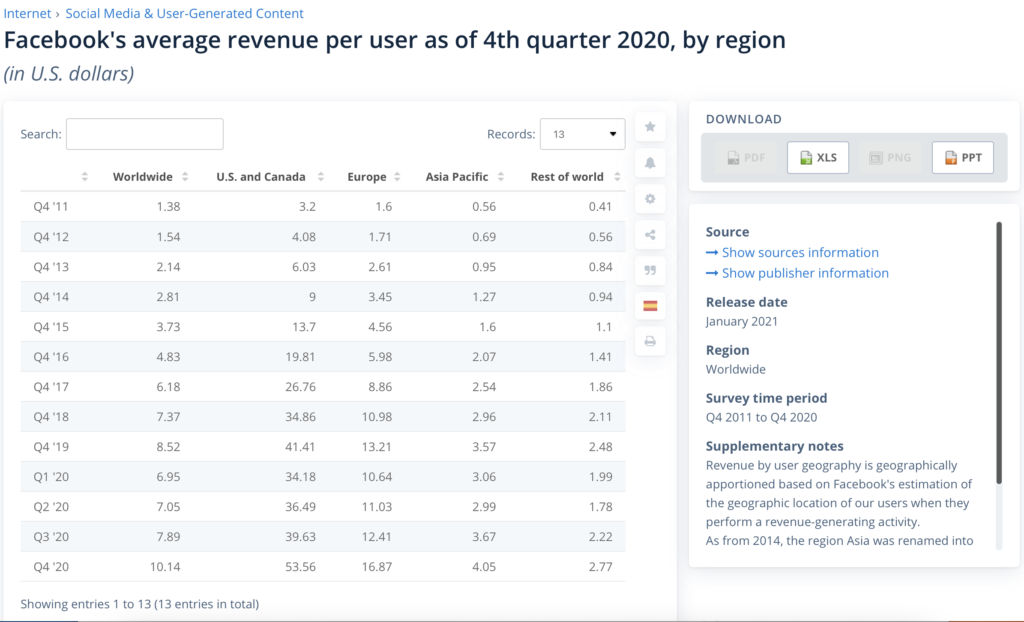 So, Facebook’s fight with Apple is a fight over ad revenue in the US and Canada. Europe is not an insignificant second. The rest of ya’ll go eat a donut.

Is Apple sincere about privacy claims or only manoeuvring for advantage? Time will tell. We’ll be watching its future actions closely. But Facebook’s history of data abuse and measurement untruths may deprive it of sympathetic ears. At least not from iOS users. They’ll be on Apple’s side. We the iSheep.

And many will also remember the fiasco of Cambridge Analytica, US electioneering, and the upcoming data merger between Facebook and WhatsApp. Facebook always seems to be in the news for all the wrong reasons.

Social trust is proving to be a thing.