The existential threat of AI. You all quit messing around now! 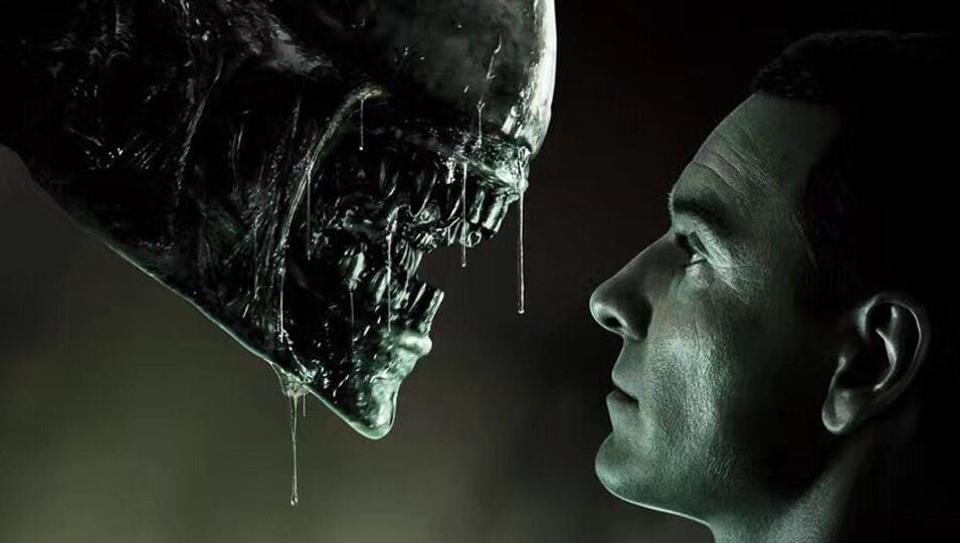 So, I’ve seen Alien: Covenant. I don’t like horror movies much. What is the logic in paying to scare yourself? I love to laugh more than I love to cry. Besides, living throws enough horrors at you don’t have to pay for it. But some people don’t just get it.

People like scientists. They just love to screw everything up. I was doing just fine in 1352, eating my mango and without a care in the world. Then they showed up with all this knowledge and inventions. Now, I am truly naked without my phone. So what if science took us to the moon? Sex takes you to the stars. And it doesn’t cost $200 billion!

Who’s taken the jam out of my doughnuts? AI, that’s what. And all these geeks messing around with it. I very much care about life and the continuation of it. When I go, I want it to be on my bed with a smile on my face and surrounded by loved ones. Not at the hands of conniving nanobots.

In Alien: Covenant, Michael Fassbender – ‘David,’ a ‘synthetic’ and an artificial intelligence – was going to see to the demise of all of us. He (it) believed humans are flawed and unworthy to be the one to colonise the galaxy. We are primitive. With all our emotions and morality. But it believed it was more worthy.

That’s being ungrateful. Never despise the days of humble beginnings.

Sure, Alien: Covenant is a sci-fi movie. But the idea of super-intelligent AI putting the kibosh on all of us is not fantastical. Here is what Stephen Hawking – the Stephen Hawking, has to say about the development of AI:

Isn’t this the dude who came up with the theory of everything? One of the smartest brains on the planet? Why aren’t we listening to him?

But Bill Gates agrees with him:

“I am in the camp that is concerned about super intelligence. First, the machines will do a lot of jobs for us and not be super intelligent. That should be positive if we manage it well. A few decades after that though the intelligence is strong enough to be a concern. I agree with Elon Musk and some others on this and don’t understand why some people are not concerned.”

Elon Musk is apparently so nervous about AI that he has started a company called Neuralink. Neuralink hopes to give man a chance when super intelligent AI finally arrives. More on that later.

But many AI boffins believe we have nothing to fear from super intelligent AI. It won’t go rogue they say. If anything, we can all sit at the beach all day sipping Virgin Frozen Margaritas. We’d finally have the intelligence to do just about anything we wanted.

Like having bacon not from a pig. Bacon, mutton or any object for that matter, is merely molecules arranged in a particular way. To make bacon, it would be a simple matter of rearranging atoms and molecules through nanotechnology (which we would have mastered). We’d have the intelligence and tech to manoeuvre matter and to create anything, as it were, from thin air.

There can’t be too much bacon, can there? I like the idea of a world with limitless bacon.

But I enjoy being alive more.

Aside all the wonders super intelligent AI portends, perhaps the greatest benefit of AI is the tantalising prospect of immortality.

Yup. We’d be able to reverse ageing, regenerate cells and live forever O king! At some point, we might even do away with our perishable biological bodies and put on non-degradable ones.

Besides, there are some people I still don’t want to be seeing in 300 years (chief amongst them Leo Messi and Cristiano Ronaldo).

However, we’re still far out from having AI with such incredible intelligence and power. The type of AI we need to sate the world with bacon is what developers in the field call ASI – Artificial Super Intelligence.

Our current AI efforts are still at the Artificial Narrow Intelligence (ANI) or ‘Weak Intelligence’. The Google DeepMind AlphaGo programme whooping everyone in Go? That’s Artificial Narrow Intelligence. Your app that translates English into French? That’s ANI. ANI specialises in only one thing. For instance, it can’t beat you in chess and also recommend a song to soothe your bruised ego. It can only do one of the two. It can’t even differentiate between a tiger and a dog. It’s pretty much a Doofus outside its one task.

ANI is commonplace; Google search, Siri and Alexa, the software in your car. That creepy business of searching for something online and then being stalked by that same something across every website you go? That’s ANI.

But ‘intelligence’ – at least human-level intelligence – is more than being great in one task. The Merriam-Webster dictionary defines ‘intelligence’ as the “ability to learn or understand or to deal with new or trying situations.”

For us to attain Artificial Super Intelligence (ASI), ANI will have to first get to this ‘general’ ability, or what experts call Artificial General Intelligence (AGI). It has to first achieve human-level intelligence as described by Professor Gottfredson. One of the biggest frustrations with our current AI efforts is trying to teach AI systems to retain knowledge between tasks. AI systems are amnesiac. They can’t remember stuff, relying only on brute computational power to get tasks done.

Achieving AGI is mighty tough. But many scientists believe we will get there. And once we do, the die is cast. AGI, being aware of its own abilities, will continually improve itself and rapidly evolve into super intelligence, ASI. ASI could be anywhere between fifty to a billion times smarter than we are.

Such intelligence could be a good thing for humanity. But it could also be our worst mistake.

When we attain ASI, it could either be Good AI or it could be Bad AI. We don’t know which. If it’s Bad AI, skadoosh. Our sell-by dates may be upon us overnight.

Estimate of when we’ll attain ASI varies. Dates between 2045 and 2060 have been bandied.

Well, if it is 2060, I should be well wizened and close to kicking it with my Maker. My eyes shall not be witnessing such miscreation.

Back to Neuralink, Elon Musk’s plan to save humanity.

The ultimate goal of Neuralink is to integrate human brains and computers to create supercharged human cognition. Remember the movie Transcendence, where Johnny Depp’s brain was fused with computers and he could do extraordinary things?  It’ll be something like that. Meld human cognition with the immense computational power of computers to create human intelligence never before imagined. Scientists call this merger Whole Brain Emulation. When we achieve Whole Brain Emulation, we might even be able to turn ourselves into superheroes.

Superheroes, uh? I want to be Batman. Totally need a Batmobile.

But to achieve Whole Brain Emulation, we’ll have to first fully understand and completely map the human brain.

Good luck with brain emulation, Mr Musk. Our success in mapping a brain is the recent mapping of the brain of a roundworm. A roundworm’s brain has a staggering total of 302 neurones. Ours contain a 100 billion.

Well, at least someone is thinking about preserving the human race. And I still want my Batmobile.

Elon Musk’s logic is simple: if we have ultra-supercharged human cognition, we’d be able to match ASI in intelligence and cancel out its threat.

Forgive me, but this whole ultra-powerful-human-cognition-superman talk sounds like what the serpent told Eve. “Yo, sweetness, have a bite and be like God.” Look where that got us.

AI taking my job is the least of my worries. At any rate, as a marketer, if AI doesn’t get you, the CEO will. I just don’t fancy a world where I’m at the bottom of the food chain. Human bosses are bad enough. But a machine boss? There’s no fooling that one. And what’s the point of work if you can’t fool around sometimes?

But hey, not to worry. We can always call in The Avengers and Justice League to save us.

PS: Tim Urban of Wait But Why wrote a detailed and brilliant piece on AI. Check it out here.