So, let’s talk about Amsterdam.

Amsterdam was the first port of call on my European jaunt. I had never been to the city although I’d flown through Amsterdam Schiphol on several occasions. I’d heard a lot about Amsterdam. Its diversity. The Red Light District and legalised prostitution. Coffee Houses that sell no coffee. The canals. Rijksmuseum. Tulips. The Amsterdam Arena and Ajax football club. The ‘Venice of the North was the stuff of myths. I was therefore looking forward to seeing the city.

So, on the wings of the Flying Dutchman I flew into Amsterdam Schiphol. I have always loved Schiphol. It has an easy and laid-back feel I find pleasing. Either arriving in Amsterdam or transiting through Schiphol, you do not feel harried or anxious. Cool Runnings. By the way, do you know our own Murtala Muhammed International Airport was modeled after Amsterdam Schiphol? We only decided to stop at one terminal.

After arriving at Schiphol, I took the NS train to the city-center Amsterdam Centraal station, or “Centraal” as the natives call it. The Gothic-styled station is the biggest in Amsterdam and the second busiest in the Netherlands after Utrecht.

What’s remarkable about Amsterdam Centraal station? Why, the double-decker trains, of course! I have never seen one. So you would understand my excitement when one pulled to a stop in front of me. I jumped in. I couldn’t care less if the train was going to Fallujah. I had to get on a double-decker train. Upstairs seating would be fine, thank you.

The hostel I booked was across the River IJ and Centraal. I arrived in Amsterdam in the wee hours and supposedly would not be able to check into the hostel until 3 pm. Eager to make the most of my two-day stay in the city, I opted to take a shower in a facility at the station so I can hit the city immediately. €18 that luxury cost me. A mugging, especially since the hostel checked me into my room at 8:30 am.

No justice can be done to exploring a city in two days. Budget and my time constraints notwithstanding, there was no excuse for treating iconic Amsterdam with such levity. Apologies Amsterdamers, I shall be back!

But what were my first thoughts of Amsterdam?

Why, the bicycles of course!

I am convinced Amsterdamers cycled right out of the womb and are born with wheels instead of legs. Folks around here probably ride a bicycle from the bedroom to the toilet.

And what is Amsterdam without its canals? It’s the only reason it is called the Venice of the North. I must have walked by or gone over 50 canals but I understand the city has over 160 canals and over 1500 bridges. That’s preposterous! Amsterdam, you take liberality too far!

You can’t miss the diversity in Amsterdam too. It is pleasantly a multi-racial and diverse city. Only 49% of Amsterdamers are Dutch while 50% are of foreign ancestry. Folks of non-Western origin account for 35% of the city’s population and over 170 nationalities call the city home. Which was great because I loathe finding myself in a back street with ultra-nationalists. I am concerned about racism when I travel. But I needn’t worry. Black lives seemed to matter in Amsterdam.

If I was to describe Amsterdam in one short sentence it would be “a cosmopolitan city that still managed to remain a little town.” You get the feeling you could walk the whole city in a day.

So, why did I come to Amsterdam?

Amsterdam held a special interest to me for two reasons. One, its light-handed treatment of topical moral issues is fascinating. Prostitution is legal and unionised in the city. And so also is recreational marijuana use. The Dutch reckon that if people are going to pay for sex or smoke ‘weed,’ there’s little you can do to stop them. So why not allow and regulate the activity instead? The city is famed for its Red Light District and places that sell marijuana are euphemistically called Coffee Shops.

By the way, I never visited the Red Light District. See no evil, think no evil.

So yes, the Dutch believe morality should not be legislated. Live and let live. Which sounds all nice and dandy. But where do we draw the line? Next stop bestiality? Paedophilia? Incest?

The second reason Amsterdam held special interest to me was its long tradition of welcoming the persecuted. Catholics and Jews found respite in the city during very difficult times. The city welcomed Jews from all over Europe when everyone else was throwing them out. They gave them a home and put their business acumen to use building the city. It was also why the city was also referred to as the “Jerusalem of the North” on account of the big Jewish population in the city at a time.

Stories of Jewish persecution in Amsterdam will inevitably lead to the story of Anne Frank and the Anne Frank House. Which was one of the reasons why I was in Amsterdam.

That and food and photography.

Let’s talk about food, shall we?

Many white folks gush about the street food called herring.

“Herring is a Dutch institution. It is delicious and healthy.”

“You can’t go to Amsterdam and not eat herring”

So I went looking for this herring and tried it.

My advice to you: never listen to white folks! 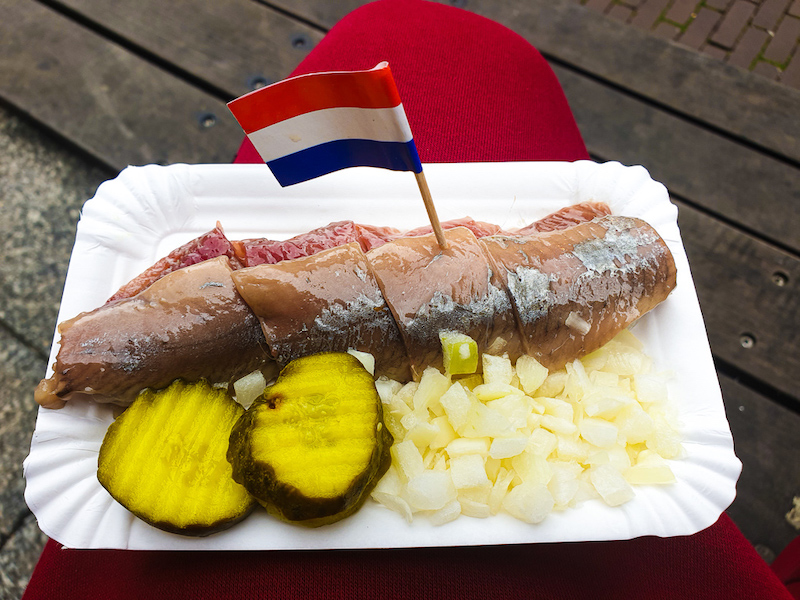 But I did like bitterballen (which is not bitter at all), stroopwafel and some of the Indonesian cuisine.

And cheese! What is Amsterdam without cheese?

I visited the Henri Willig cheese factory in Zaanse Schans outside the city. I have never seen such varieties of cheese! Baby Gouda, Goat Cheese, Sheep Cheese, Baby Goat, Baby Cheese, Herbs & Garlic, Pepper, Red Chilli Pepper, Fenugreek. My face lit up like a Nigerian politician at the sight of lucre.

And eat I did. I was shameless with the generous free tasting. Deride me all you want. He who brings cheese, brings life.

One of the pleasant cheese maids proceeded to teach us the right way to pronounce ‘Gouda’. It is pronounced ‘hak-ouda.’ You pronounced the ‘ha’ as if you were summoning phlegm from your gut.

OK ma’am. Just let me have the cheese, thank you. 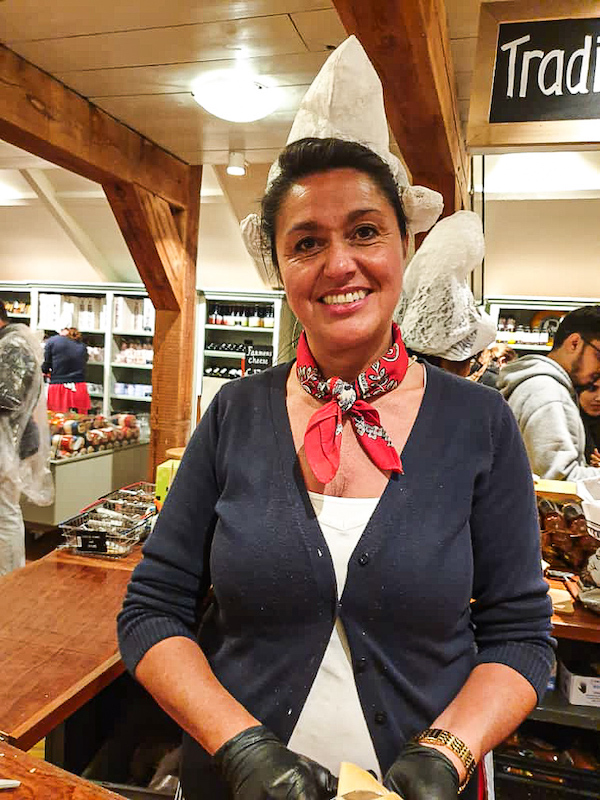 In terms of the worst weather on the planet, London has kith and kin in Amsterdam. If your life depended on it not raining, you will die. Because it will rain in Amsterdam. In winter. In fall. In summer. In spring. I hated that about Amsterdam.

If you don’t know the story of Anne Frank, allow me to summarise.

Jewish girl Anne Frank was 11 years old when Nazi Germany invaded the Netherlands in 1940. Anne lived with her father, mother and sister in Amsterdam.

They lived there for two years until they were discovered in 1944. Rumour has it they were ratted out. The Nazis deported the family to the notorious Auschwitz-Birkenau extermination camp in Poland (Which I was to visit).

Anne and her sister, Margot, were later moved to the Bergen-Belsen concentration camp in Germany. Condition at Bergen-Belsen was no less bad than at Auschwitz. The prisoners were overworked and many died from sheer exhaustion. Communicable diseases were also rife in the camp and Anne and  Margot contracted typhus to which they eventually succumbed.

It broke my heart that they died in February 1945. British forces liberated the camp in April 1945.

Peeps, no matter what, hold on. Persevere. Find a reason to hold on. Victory might be 24 hours away.

The diary somehow escaped the clutches of the Nazis. Otto Frank was moved by her daughter’s story. On encouragement, in 1947 he published the diary into the now popular novel, Het Achterhuis (The Secret Annex). He hoped that readers of the diary would become aware of the inherent evil in discrimination and racism.

The book has since been translated into over 70 languages. The house in which Anne and her family hid is now a museum, the Anne Frank House. More than 1.2 million people visit the house every year.

That was some summary, wasn’t it? You really can’t summarise agony.

I had intended to visit the Anne Frank House. But due to the frazzling of cells in my brain for no apparent reason, I forgot to book the guided tour of the house.

You see, tickets to the Anne Frank House are sold out up to 2 months in advance, especially during summer. And this was summer. A limited amount of tickets are released online at 9 am every morning on each day of visit. But the queue of people waiting to snatch them up stretch from Amsterdam to Babylon. I am not especially endowed with patience.

Well, I was in Amsterdam anyway and I might as well make the most of it. I set about taking pictures. I wandered around the city. The Joordan, De Pijp, Amsterdam-Noord. I visited the Rijksmuseum, Zaanse Schans, Inntel Hotel at Zaandam. I should fare better in Berlin, my next stop on the jaunt.

But it rained. My two days in Amsterdam were cold, wet and overcast.

1-0 Amsterdam. You win this tie. There will be a return leg. You will not get the better of me again!

6 thoughts on “My Holocaust jaunt. Amsterdam, I shall be back!”