’76 or The Wedding Party. Which is the ‘better’ movie?

We are in the BAFTA and Oscars month! My money is on Casey Affleck winning Actor in A Leading Role for Manchester by The Sea.

When I think about the Oscars, my mind inexorably goes to Nigerian movies. I’m full of optimism though. It’s now clear that if you make a good movie and with the right advertising support, you’ll make money. And when there’s money to be made, quality improves.

There’s always been two Nollywoods. There’s the ‘typical’ Nollywood – the Nollywood that shoots a feature-length movie in three days. The Ebinpejo and Upper Iweka Nollywood. And there’s the ‘atypical’ Nollywood, which deploys considerable creative brain power, craft and material resources to movie making. This is the cinema-first Nollywood. The Nollywood of Chief Hubert Ogunde, Baba Sala, Ade Love, Tunde Kelani and younger Turks like Biyi Bandele (Half of a Yellow Sun), Kunle Afolayan, Izu Ojukwu (’76) and Kemi Adetiba (The Wedding Party).

Even if you live under a rock, chances are that your rock would have told you about ‘76 and The Wedding Party. Arguably the two biggest Nigerian movies of 2016. I greatly enjoyed both movies.

But I couldn’t help comparing the two. Pondering which is the better movie. It’s the curse of the creative mind. Regrettably, it is a mind intent on being a judge over a matter it lacks jurisdiction and on which its opinion is best kept to itself. A mind apart from the propriety of its owner.

Well, of all the things I’ve lost, I miss my mind the most.

So, which is the better movie?

For one, no two movies are the same. ’76 is a drama/adventure, The Wedding Party a romantic comedy. Asking which is the better movie, in a sense, is like comparing apples with oranges.

And then how do we define better?  For instance, which is the better movie between the Shawshank Redemption and The Hangover? Or between The Blind Side and Tinker Taylor Soldier Spy? With movies, ‘better’ and ‘best’ are always subjective descriptors.

I’ll be defining better in terms of overall artistic and creative values; the screen play, characterisation, production design/art direction and cinematography.Given that I lack authority in movie matters, you’d all do well not to take this personalview of the movies personal.

The screen play is the script. The story. Ada meets Fred. Ada gets pregnant. Ada realizes Fred is a ritualist. But Fred is very loving. Ada must summon all her courage and intelligence to leave Fred.

The story maketh the movie. A lousy story makes for a lousy movie.

I just can’t help but feel that ’76 told a much better story. While not a biopic, it draws us into the veiled drama of coups d’état, emotions and consequences. It latched onto a real event and spun its own web around it, taking us on a powerful emotional journey. It has everything a good script should have; protagonist, antagonist, desire, conflict, journey, crisis, climax and dénouement. And every scene in the movie flowed organically and didn’t seem tacked on. 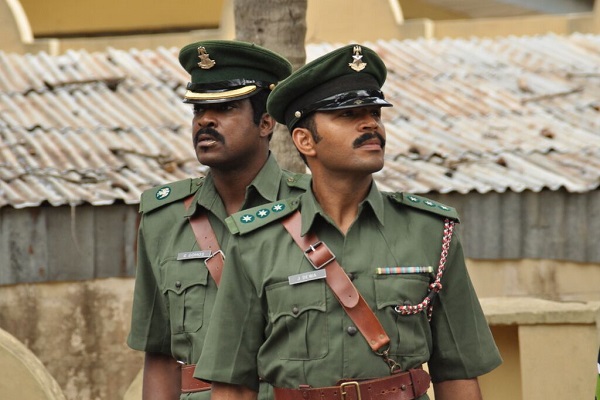 While the story in The Wedding Party is credible, I feel it’s a bit superficial and not a particularly strong story. Dozie was always going to marry Dunni, and the Cokers and Onwukas would bury their hatchet (thankfully not in each other’s heads). This linearity could have been compensated for if the movie had more outrageous hilarity, for instance. Think of The Hangover. Think Like A Man, even Thirty Days In Atlanta. 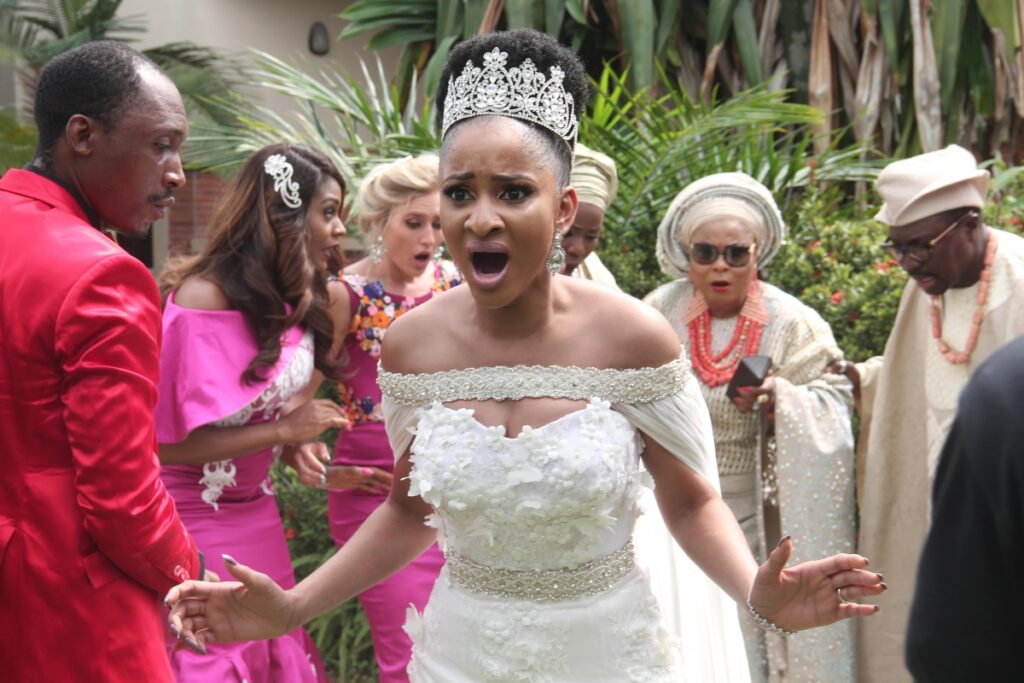 Just as a Samurai sword is only as powerful as its master, so is a movie as great as the performance of its cast.

For me, ’76 just narrowly edged The Wedding Party in well-defined characterisation and performance. From the fawning Corporal Obi (Dainel K. Daniel), the effervescent and sexy Eunice (Memry Savanhu), to the harsh personality of Captain VM Jaiye (Adonijah Owiriwa), and the distraught Suzy (Rita Dominic), the casting for ’76 was such that all the actors fit the role. 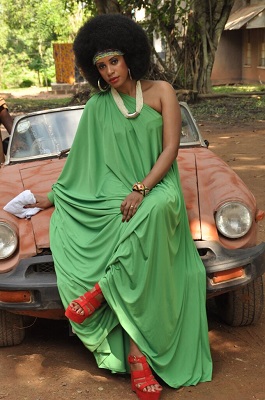 I thought Sola Sobowale, Ireti Doyle and Richard Mofe-Damijo were absolutely fantastic in The Wedding Party. Such was their brilliance that after the movie, you couldn’t possibly think of any other actor for their roles. Most people could swear that they knew mothers like Tinuade Coker and Obianuju Onwuka. 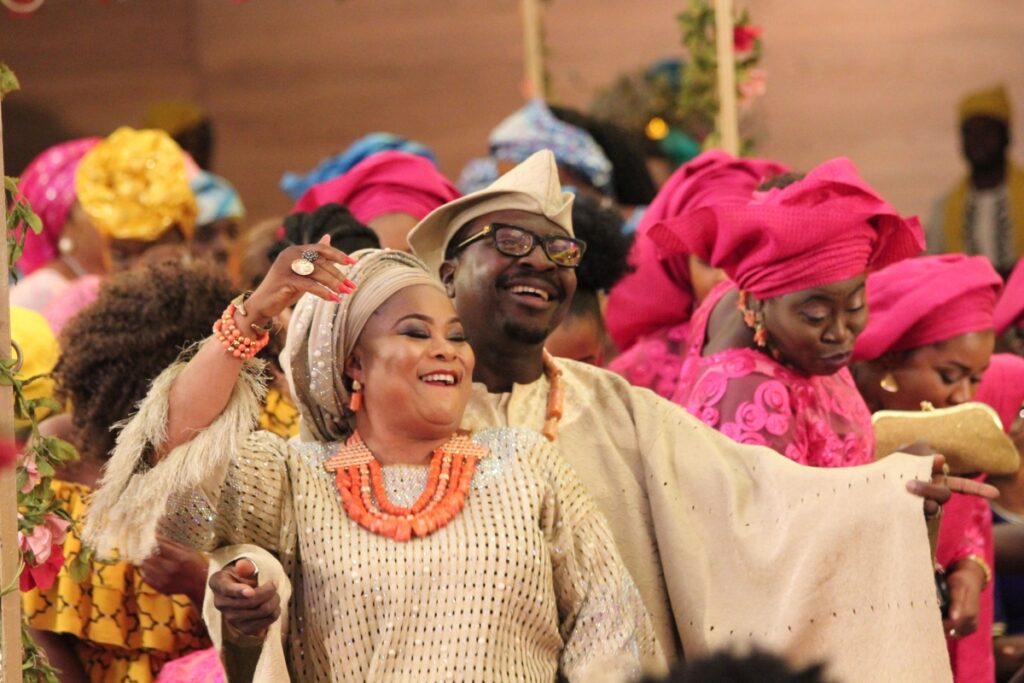 I also thought the casting of Adesua Etomi as the virginal and naïve Dunni Coker was on the mark. I went away with the impression that she was probably a virgin in real life and equally trusting. The actor and the character became one.

The singular brilliance of Sola Sobowale, Ireti Doyle and RMD however unjustly makes the decent performance of Bank W, Alibaba and others look, well, er, decent.

Besides, I thought the character of Engineer Coker (Alibaba) was rather too exuberant. It tends to be that when a wife is theatrical like Tinuade Coker, the husband would be more reserved. I think that would have made for a more real characterisation.

If you wanted to create a Lagos of the 1950s in your movie, production design makes it happen. They create the settings, styles and feel of the movie.

The attention to detail in ’76 was brilliant. Did you guys see the old bottles of Star, Coke and Fanta? The plates and bowls I know some of our mothers and aunts still keep? The ‘Daily Sketch’ and the ‘Nigerian Observer’ newspapers? They nailed it. From the costumes, to the vehicles and the apartments, great thought was paid to replicating the life of the ‘70s and the army barrack. In a country and industry where excellence is not fashionable, ‘76 showed us it is possible if we value it. 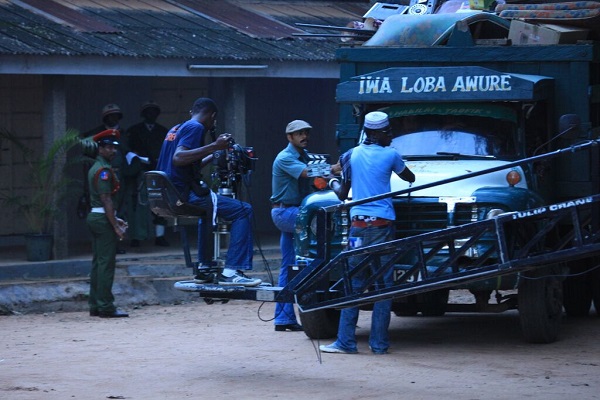 I suppose The Wedding Party had a lot less effort to put in replicating a ‘society wedding’ than ’76 replicating the milieu of a 1976 coup. Doesn’t necessarily make the production design of one movie better than the other. But you know, generally, people tend to respect what seem more difficult to pull off more.

Was expecting a more lavish wedding and reception though, given the Onwukas and Cokers were supposed to be rich as filth. Ironically, I thought the premiere of the movie was more opulent than the wedding reception.

Cinematography is simply using the picture and filming techniques to tell the story. It’s a lot of technical stuff; lighting, depth of field, camera movement, special effects and things like that. It is shooting the movie.

’76 looks and feels real. Like it was truly shot in 1976. A lot of craft went into that. One of the many great aspects of the movie. I understand that the movie was shot on 35mm film. More difficult and expensive process. Adorers will say it gives a better feel than digital cinematography. But it’s all romanticism.

The photography of The Wedding Party did its job well. Told its story. But nothing extra. Didn’t pick up my jaws from the floor. Won’t win Best Cinematography. Current holder is The Revenant. Glorious picture.

We all must tip our hats to the marketing of The Wedding Party. Backed by the media power of EbonyLife TV and Mo Abudu, the movie was inescapable. It was on TV, on radio, on blogs, on social media; heck Barrack Obama also probably knew it was going to be in cinemas December 16! It is the best marketing of a Nigerian movie I have ever seen. Proves advertising works.

So, there’s my view of the two movies. Very rotten tomato business I admit. But if movies are going to be asking us to shell our money to go see them, we should be asking of them some quality. More than a minimum level of quality. Quality as good or even better than ’76 and The Wedding Party.