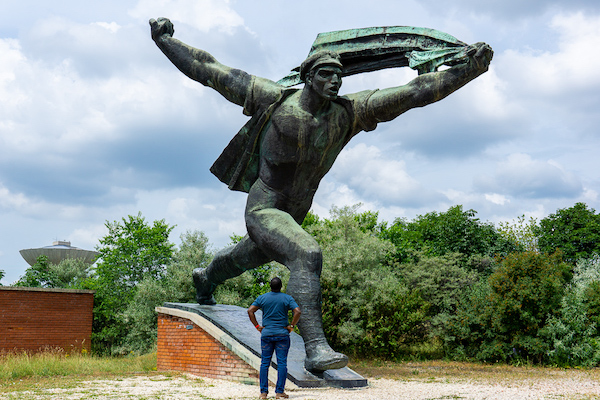 So, on to Central Europe. To Budapest.

Just so you know, Hungarians hate it when you refer to Hungary as being in Eastern Europe. They are in C-E-N-T-R-A-L-E-U-R-O-P-E!

My train from Munich to Budapest was the Euronight sleeper train Kalman Imre. It leaves Munich Hbf at 23:00pm to arrive at Budapest Keleti station at about 8:00 am. I’d booked a berth in a 4-bed couchette for a comfy night’s sleep. A pleasant Swiss guy and I turned out to be the only occupants of the cabin. I was hoping on that. I’m in luck!

The train pulled out of Munich Hauptbahnhof. While the Kalman Imre was a clean train, it was not as modern as the Deutsche Bahn Sprinter trains I’ve come to love. The bunks in the cabins reminded me of my boarding school. Double bunks. Thin mattresses. Flat pillows. It was a cherished memory. The ride was smooth.

A few minutes into the journey, the portly conductor rolled to our cabin. He advised that we bolt our door throughout the journey. I found the advice unnerving. What did he mean bolt our door? I asked him if there was a possibility of theft or robbery. He shrugged and smiled.

Not good. Not good at all. My mind went to Murder on the Orient Express.

I bolted the door after him.

It was an uneventful journey. It was dark. We went through sleeping villages and towns. Nothing of interest. There was a full moon out and my mind entertained otherworldly thoughts. What if a lycan jumped on the train with Van Helsin in hot pursuit? After all, Transylvania was not far off. I thought I also saw Dracula perched on a church spire regarding our train with interest.

At some point during the journey, I woke up to the sound of loud conversations outside our door. It must have been around 2 am. Soon there was a loud knock on our door.

We didn’t open it.

After a few seconds, the knock was repeated. This time heavier.  It was accompanied by a deep-throated announcement of “border officer” or something to that effect. Only then did we open the door.

At the door were three well-built men in plain clothes. They were accompanied by the conductor. They were dressed in mufti but had police-type vests over their clothes. They had sidearms. One of them had some sort of scanning device in his hand.

They introduced themselves. There were Austrian border control officers. We had crossed into Austria. Big deal. It’s only Austria, not Asgard. They asked to see our passports. The guy with the scanner scanned my Schengen visa with the device. He got on a mobile phone and read something out on my visa. He wasn’t speaking English so I couldn’t tell what he was saying. Soon after he gave me back my passport and bade me goodnight. They were professional and courteous if stern-looking.

Alas, my Swiss mate took leave of me at Vienna. I now had the cabin to myself. There was still about three hours left till we arrive at Budapest.

Large, classic and dated. I’m certain it looked grand in 1884 when it was opened. To me, however, it looked like a train station in a Cold-War Eastern Europe. Russian and American spooks arriving in trench coats and umbrellas.  Tinker Tailor Soldier Spy.

I attracted some curious glances as I got down from the coach and headed out of the station. I took it Budapest didn’t see too many handsome black dudes. Well, here I am fellas! Free hugs for the first ten smiles!

Cleft in two by the mighty Danube River. Hilly and imperial Buda to the west, and flat, buzzing and bourgeois Pest to the east. The two cities came together in 1873 to form Budapest.

Check this. One of the names for consideration for the city was Pestbuda? Luckily, the politicians didn’t have the final say.

So, why am I in Budapest?

You mean apart from the fact that the name sounds romantic?

Well, if there was a single country that experienced the double whammy of both Nazism and Communism within a short period, it was Hungary.

During WWII, the Nazi proxy party in Hungary – the Arrow Cross party – a fascist organisation, unleashed total terror on the people of Budapest. Thousands of Hungarian Jews were rounded up and deported to extermination camps all over Europe. Some were executed in the city and dumped into the Danube.

Then came the Soviets after Hitler lost the war. They imposed their own brand of terror on Hungary and Budapest. Citizens were reduced to subjects and killed for the flimsiest reason.

Consequently, I was in Budapest to learn more about Jewish subjugation and communist oppression. To that end, I was very keen to visit the Dohany Street Synagogue – the largest Jewish synagogue in Europe and the memorial it housed. I was also visiting Memento Park, with its giant sculptures venerating communism. On my hit list were also the Arrow Cross Party torture chamber – House of Terror and Shoes on the Danube Promenade memorial.

But first, what were my first impressions of Budapest?

At times, I thought it was a city suspicious of black people. I did not experience any overt racist incidence. But it’s all in the simple things. The stares. The looking-over-shoulders at me as I walked past. The deliberate attempt to avoid hand contact.

In Budapest, I was conscious that I was black. But I sensed no aggression or resentment. More like caution and indifference. I can live with that. I’m gonna be out of your lives in two days.

There is no Uber in Budapest, only Taxify (Bolt). I can’t explain it but I found all the Taxify drivers in Budapest the most amiable of purveyors. Almost all of them thought I was American. I wasn’t feigning a foreign accent. One of the drivers put on a hip-hop track as I got into the car. He was bobbing his head enthusiastically and smiling at me. I rated him 5 stars for effort.

But it irks me at the supposition that any touristy black man in Europe is likely not African. Its part of the racist profiling of Africans. My wife and I had encountered this perception on earlier visits to Paris and Rome. Some white hucksters in those cities had tried to sell us on some over-priced memento taking us for gullible Americans. The one in Rome kept saying “American, buy. Only $40.” In Paris, the huckster was around the Louvre.  He accused me of denying being American because I did not want to buy from him. Only when I began to berate him in Yoruba did he leave me alone.

You have to go through serious security checks before you get in. Pat downs, body scanners and luggage scanners by eagle-eyed and steely-faced security personnel. One time, I put my camera backpack on the ground and took a few steps away from it to take pictures. Two security men were instantly on to me telling me to pick the bag up.

I am not going to fart in this place without clearance.

But once inside, the splendour and glitz are impressive. Seated in the pew, a rabbi talked us through Judaism, its different sects and the history of the synagogue.

With the Nazis penchant for confining Jews to a single location before transportation to concentration camps, the synagogue found itself within the borders of the Jewish Ghetto in Budapest created by the Nazis. The Nazis had similarly created such ghetto in Warsaw – the Warsaw Ghetto. The synagogue consequently housed several hundred Jews. Over two thousand Jews died within the ghetto from starvation and the cold. They were uncustomarily buried within the premises of the synagogue. The tombs remain to date. At the back of the synagogue is the Memorial of the Hungarian Jewish Martyrs, a metallic willow tree whose leaves bear names and tattoo numbers of the dead and those who had disappeared. I was moved to tears. 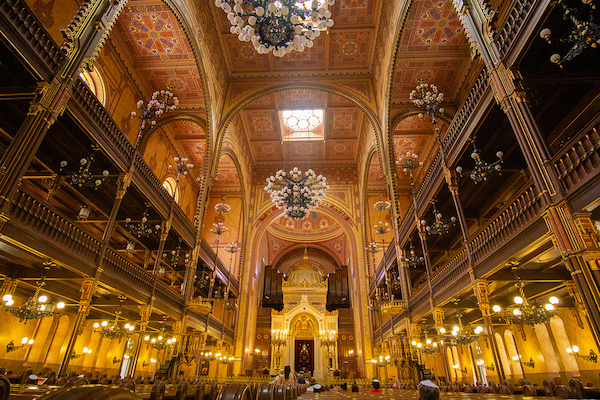 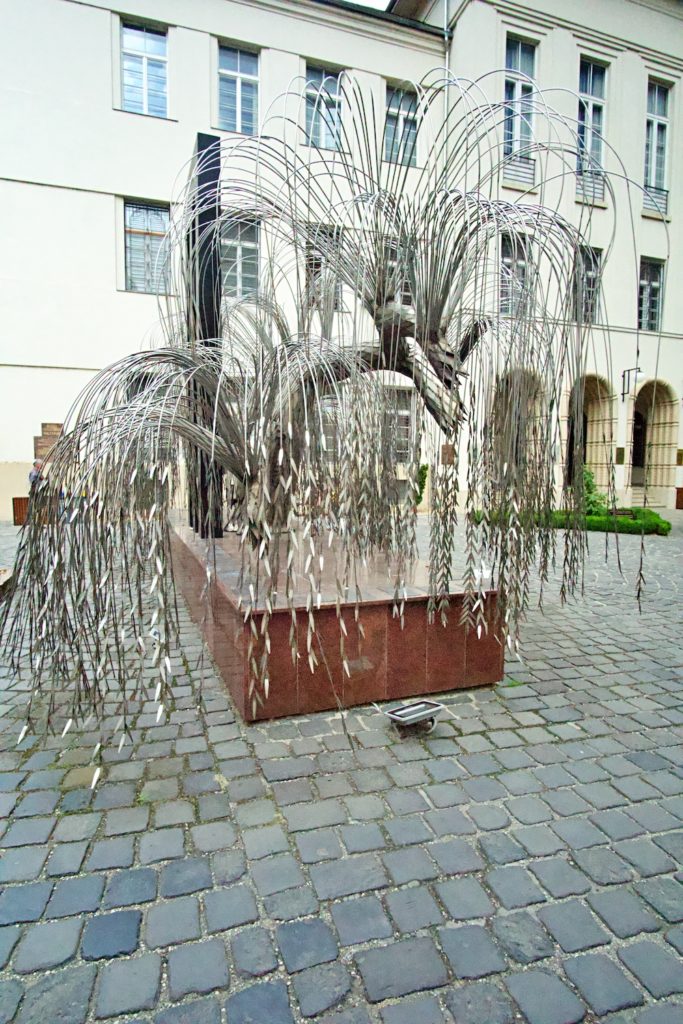 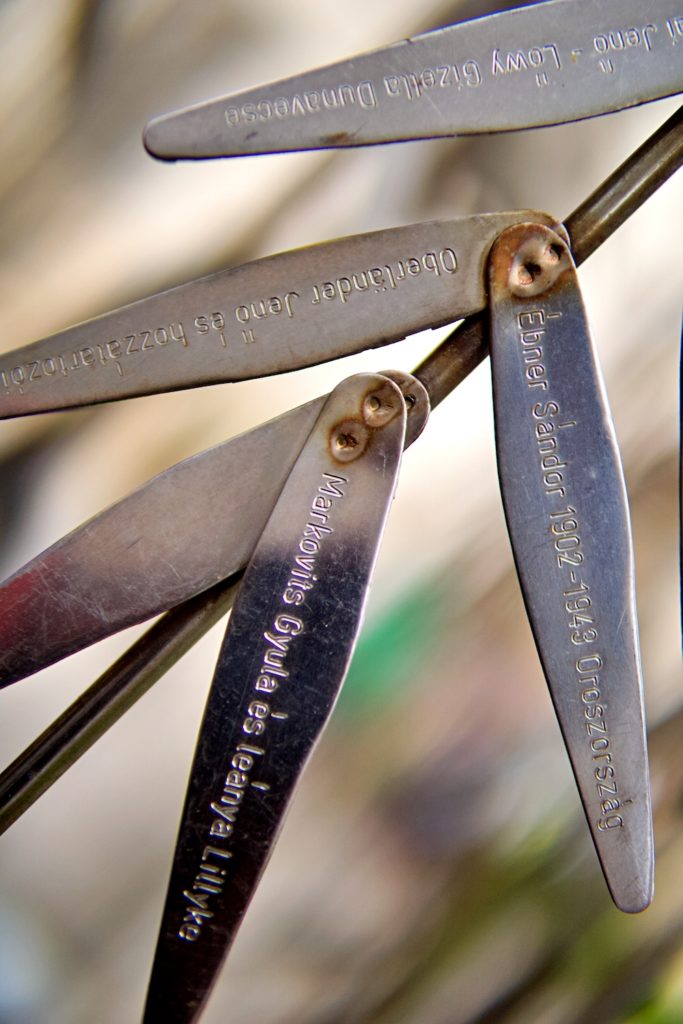 Done with the Dohaney Street Synagogue, I hailed a Taxify to St Matthias Cathedral and the Fisherman’s Bastion on the Buda side. The latter is perhaps the most visited tourist attraction in Budapest on account of its panoramic view of the city.

In the evening, it was time for some chow. And what better place to eat than the Szazeves Restaurant, the oldest restaurant in Budapest. A Taxify driver had recommended the restaurant for an authentic Hungarian experience. I checked the review online and knew I had to pay them a visit 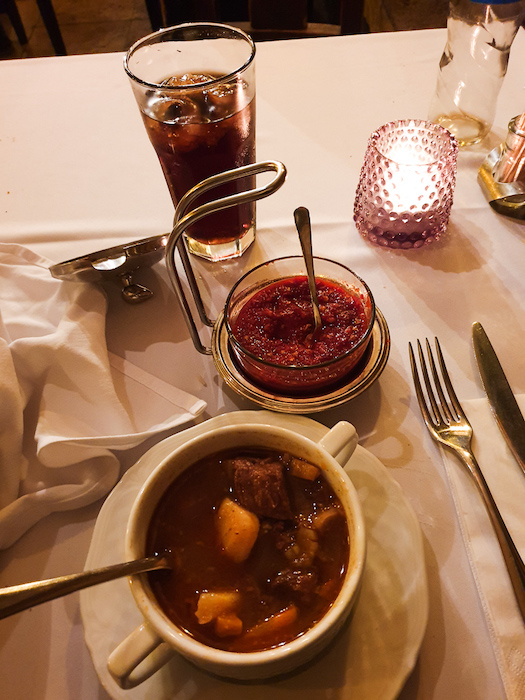 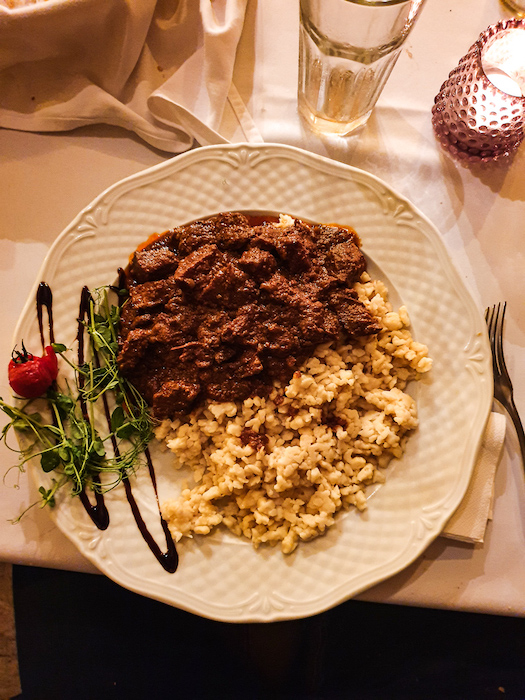 Magyaros gulyasleves or Goulash soup Hungarian style. And Belszingulyas galuskaval aka Sirloin goulash with dumplings. I tell you, people, a person can do nothing better than to eat and drink and find satisfaction in their own toil.

The next day, it was time to hit the House of Terror and the Shoes on the Danube Promenade.

The House of Terror is a museum on the popular Andrassy Avenue in Budapest. The museum contained artifacts and exhibits related to the fascist and communist era in Hungary. Citizens were interrogated, tortured or killed in the building by both the Arrow Cross Party – and the AVH, the puppet but no less mean state security apparatus of the occupying Soviets.

An ominous soundtrack accompanies you as you walked throughout the house. It was dimly lit, adding to the sense of dread. The dungeons below were particularly unnerving. You feel someone might come out from nowhere and do you in. Painfully, we weren’t allowed to take pictures inside the building. 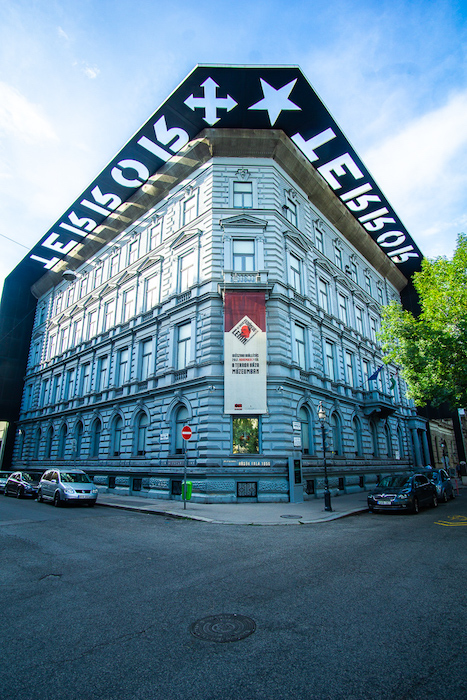 Shoes on the Danube Promenade is the most touching and poignant reminder of the atrocities of the Nazis against Hungarian Jews in Budapest.

Fathers, mothers, brothers, sisters, friends and children were rounded up and lined up on the bank of the Danube. They were asked to remove their shoes and face their executioners (shoes were valuable during the war). They were then shot in cold blood, their bodies falling into the freezing Danube. 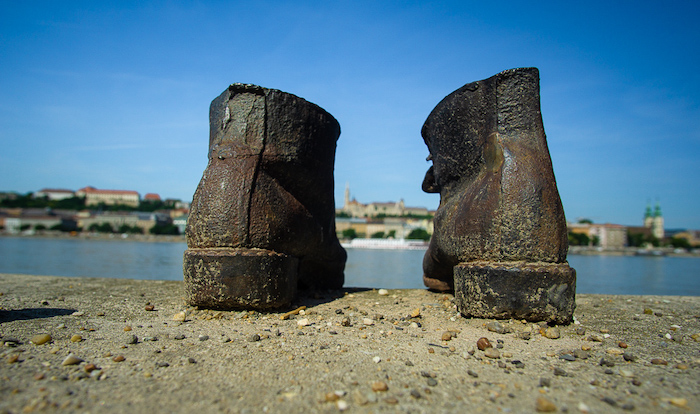 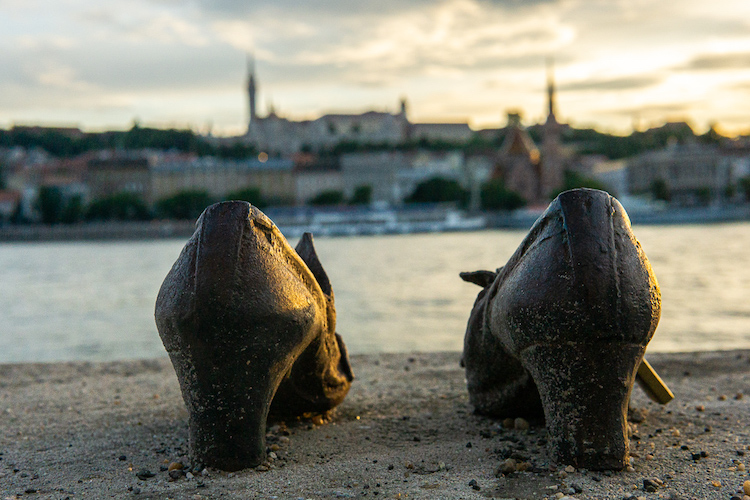 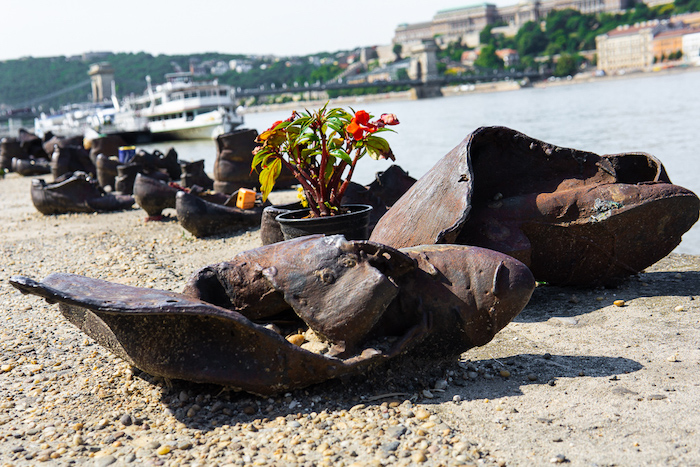 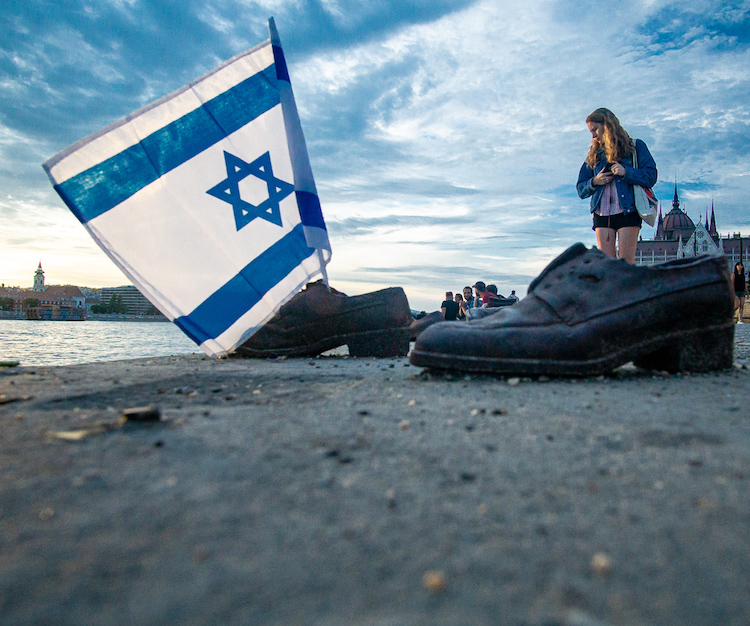 It was a haunting memory. I imagined children holding tight onto the hands of their parents cold and crying and being told by their parents that everything was going to be all right, when in fact they knew it wasn’t.

The Shoes on the Danube Promenade was the highlight of my trip to Budapest. I tossed and turned in my bed that night. I wasn’t prepared for the emotions of the memorial.

Well, if I was this torn by the shoes, what emotions will I experience when I get to Auschwitz-Birkenau?