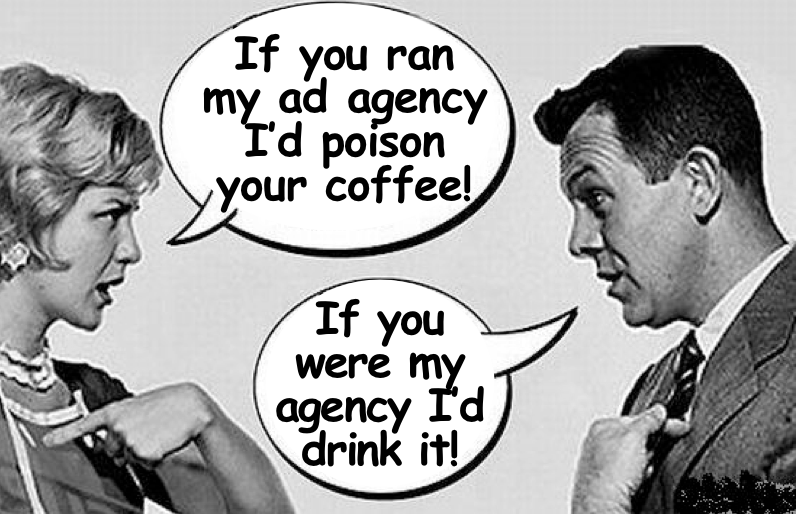 Is there something in the water on the ‘client side’? Something that turns good people into ogres? An agency guy crosses over to the client side and then haunts dreams and kills libido. What gives?

I have drunk from the water on both sides and I share my thoughts on why the relationship is often fraught. It might seem I’m taking a piss and desecrating otherwise torturous experiences. That’s the problem these days: everyone is too sensitive. Too little perspective.

For the records, I like the water on the client side better. It’s got several minerals and vitamins. It changes to Kool Aid now and then, but after a while, you get used to it. It goes down well with meals.

So, why is there so much distrust and disrespect between clients and agencies?

The first is impersonation.

Here’s an advice for my agency chums; perish all thoughts of being accepted as ‘consultants.’ Consultants are paediatricians, McKinsey or an embalmer. People who do important stuff.

But marketing communication? Fat blubbery chance! Excuse me, when has advertising saved a life or made a dent in the universe? Yes, that’s right; never! It was Newton’s Third Law of Motion that propelled man to the moon, not The 22 Immutable Laws of Branding. Advertising is as George Orwell described it – “…the rattling of a stick inside a swill bucket.”

(No disrespect, but that Orwell fella should have busied himself with writing Animal Farm 2.)

Agencies, repeat after me: We are not important. We will never be important.

Oh, media agencies came close to being called ‘consultants.’ But they screwed it up with dodgy practices and when Big Macs started appearing next to Jihadi Johns.

Then there’s also the matter of tangible results.

It’s OK to talk about emotional connection, share of mind, brand salience or Intention To Buy. But how about actually buying? How about consumers bringing out their wallets and saying shut up and take our money? How is that for Last 7 Days Consumption?

Vanity metrics are as much a marketing problem as they are agency problems. The C-suite considers them no more than will-o’-the-wisp. Ignis fatuus. They are about as useful as a matchstick in hell.

The CMO wants to build the brand with an eye to sustainable profitability. The CEO says “build the brand but give me short-term and medium-term profits.” Tactics replace strategy. Like Mike Tyson said, “Everyone has a plan until they get punched in the mouth.”

So, Marketing abandons The Game Plan. It gives new mandates to its agencies. Agency argues against knee-jerk reactions. Client retorts “the Plan is whatever we say the Plan is!”

At some point, one of the two gets thrown out from the fourteenth-floor window.

It is not the client.

Agencies, don’t cry more than the bereaved. The Plan is whatever the client says the Plan is.

Third. Agencies get exasperated with clients for not ‘getting it.’ Agency has crafted a brilliant strategy and campaign. But the client can’t see it.

In my experience, I have found the buck to seldom stop at the table of the client contact. Sometimes, it doesn’t even stop at the desk of the head of marketing. In some organisations and markets, it goes all the way to the CEO.

When I moved to the client side, I wanted to influence the development of great campaigns. I had always wondered why clients were so stiff-necked. Why they don’t ‘get it.’

In some cases, I was able to influence campaigns. But they were fewer than I would have loved. The culture of the organisation and leadership styles come to bear.

So when next you’re peeved over why the client cannot recognise the brilliant idea that has just slithered up his face and spat in it, understand that your client contact may be powerless to approve the work. Be discerning. Being pitiless only makes the client waspish. You’ll find the sting excruciating.

Sure, there are the cases of unimaginative clients and the throttling of great ideas. Both agencies and clients cancel each other out in this regard. So we’ll call it even.

And don’t even get me started on creative people baying for ‘brave’ work. Mea culpa when I was a creative.

‘Brave’ is putting money in a Ponzi and hoping to be a billionaire. ‘Brave’ is betting the farm at poker. In business, its synonym would be  ‘stupid.’ Have you ever seen a CEO that likes to look stupid? Me neither.

I believe the words you were looking for are ‘smart,’ ‘informed’ and ‘exciting.’

Fourth. Demand and supply. There’s a surfeit of agencies and hucksters all over the place. Most of whom will undercut one another for a slice of the pie. Yeah, free market sucks.

But clients love it. Who doesn’t love being fawn over? Make the smitten lover jump through hoops?

But you might say “Oh, the cheapest agency is not necessarily the best agency.”

Try telling that to Procurement. They wear headphones. It’s noise-cancelling. And never Beats by Dre.

But it is misunderstood. Agencies are not obtuse. They want money as much as they want recognition. And they know happy clients guarantee money.

The problem lies in both parties not understanding each other’s pain points.

Clients need to understand that the biggest asset an agency has is its brain power. Awards help agencies attract great brain power. Talents that in turn help them do great work. Great work that drives tangible results.

Awards also help agencies get on pitch shortlists and win new businesses. When agencies win new businesses, they earn more money and are able to invest in and develop better talents. That is if the holding company doesn’t hog the dough.

Agencies reward clients who help them win awards with more great work. They move the earth for the client. When I was at the agency, there were clients that could call me at 3 AM and I would be happy to take the call. Their work helped me attract great talents to the agency. They helped us to get new businesses.

In a relationship, you sometimes indulge each other’s fancies. Clients, if there’s a window for your agency to create award-oriented work, leave the window open. They’ll repay you back a hundred fold.

Agencies, if your client is adamant on vanilla, give him vanilla. Your time for bacon caramel maple syrup will come.

It helps the relationship if clients can also give timely and coherent feedback on work. Timely so you don’t ruin the agency’s weekend and other plans. They have families and a life too.

Coherent because it saves time and frustrations. And prevents the agency turning what you say into funny posters like those below. Nothing frustrates creative people like unclear and unhelpful feedback. What do you mean you are not ‘feeling’ the ad? It’s not a bloody sauna, is it?

And when you give feedback to your agency, make sure it is a ‘consolidated’ feedback. Aggregate the views of everyone important on the project, get alignment on the views from the bossman, and then brief the agency. Saves everyone time, money and angst.

A lot has been said about the absence of analytics or data mining in agency work.  Truth is, advertising agencies can never be as good as McKinsey or Deloitte in that regard. That’s not what agencies are good at. Their strength lies in generating and executing ideas. In creating magic from tabula rasa. Advertising agencies fall on their swords when they position themselves to be more than this. No one buys it.

A while back, I asked my agency what they thought of me and my style. I’d believed I was a cuddly bear. One of the creatives pointed out to me that there’s a difference between a grizzly and a teddy bear.

We can all do with some introspection. 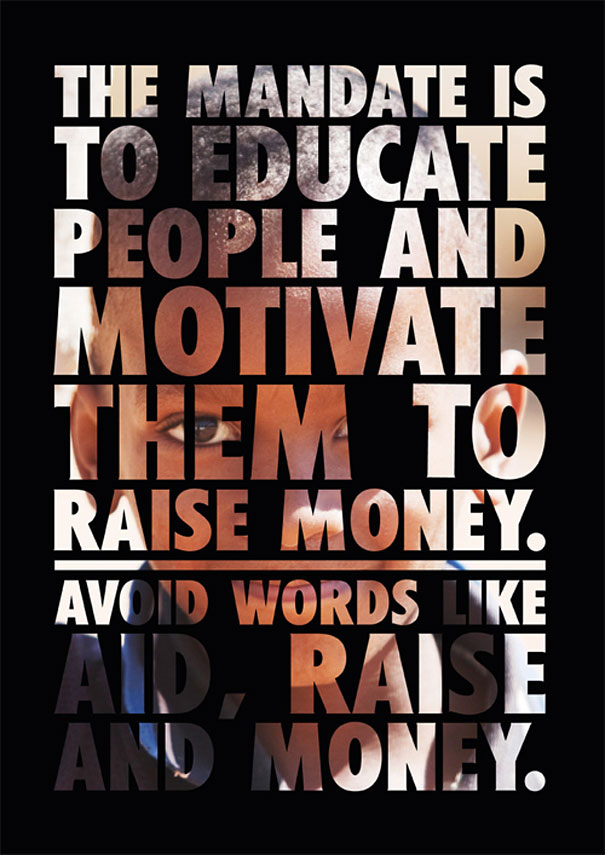 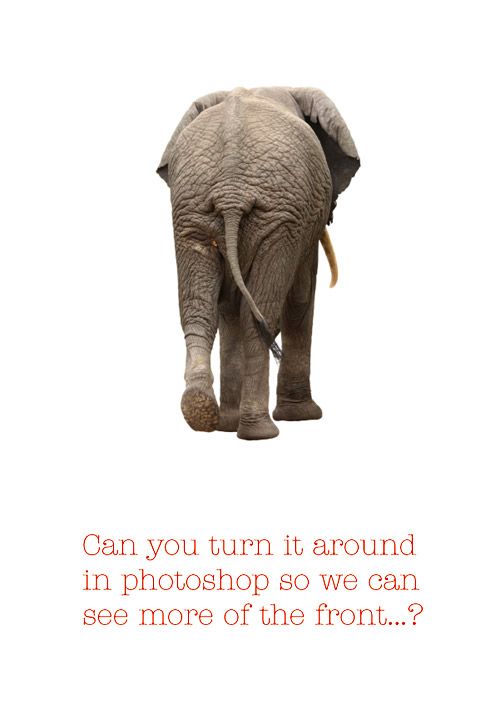 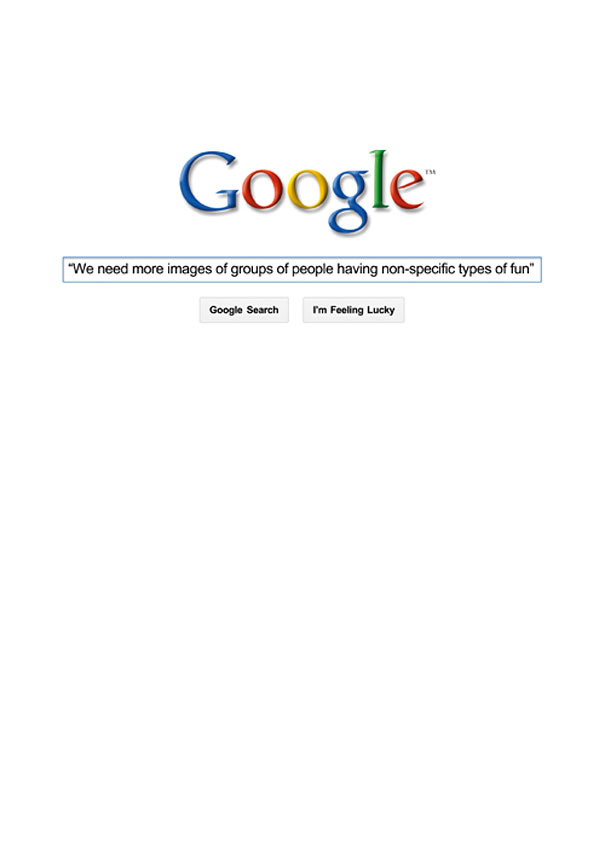 10 thoughts on “What I learnt from being both a client and an agency guy.”