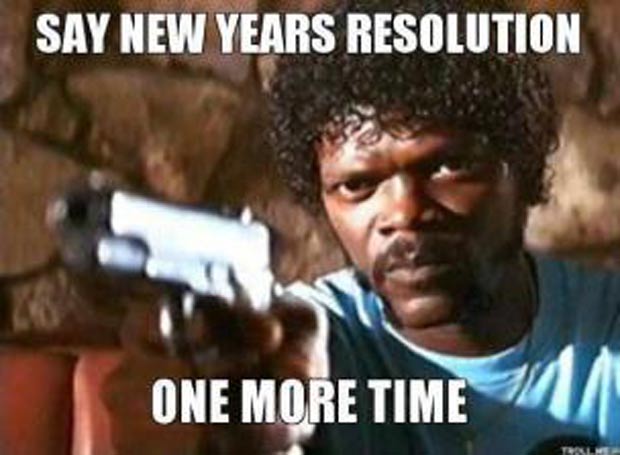 It’s barely four days into the new year and I’m already calling it quits with a New Year resolution. That’s a full month ahead of the time researchers say most people abandon their New Year resolutions. Great to start the year breaking records. Going to be an awesome year.

See, I had decided to get fitter and run faster and further. Maybe do 5K in 15 minutes.

If I never respected runners, I now do. It’s pretty remarkable to run so fast when nothing is chasing you.

I quickly realised that for me to do 5K in 15 minutes, I’d have to be chased by Hannibal Lecter, a 90-foot anaconda and a Tyrannosaurus Rex. And only after all negotiations have failed.

Plus, when you really look at it, only the wicked flee when no one chases him.

Which is what a lot of New Year resolutions are: pipe dreams.

They are pipe dreams because they do not account for one’s current trending, circumstances and will power. The goals end up being unrealistic.

Take people who resolve to quit drinking in the new year.

For many of such folks, that’s like a lion vowing to quit venison for Caesar Salad. It’s never going to happen. At least not cold turkey.

Rather, the practical way for Mr Mufasa to begin his change of diet is to perhaps first develop a taste for lettuce. He can then move on to Parmesan cheese. Then to croutons, garlic cloves and olive oil. If he has a sophisticated palate, he may try some Worcester sauce and Dijon mustard.

With this gradual introduction to new nutriment, there’s less chance of Mr Mufasa retching, getting depressed and reaching for the nearest Zebra rump after his first date with Madame Salade.

But the drunk’s resolution to go teetotal must first start with positive affirmation. He must admit his insobriety:

Everyone has a weakness. So, we won’t judge our beloved drunk. We’ll let the street pole do that.

So, after the positive affirmation, the boozer needs to work his way down to abstinence. If ten bottles a day was his usual volume, he could aim for nine a day. After a couple of months, he could then move to eight. And then seven. In about a hundred years, he should be weaned off the tipple.

But you get the point: be realistic and go slow. Give your weak willpower the time to adjust to the treachery.

When I was much younger and before I got married, I always had the resolution to manage my money better in the new year. But by December, I was back wondering where the dickens all my money went.

The problem with the resolution was, I was putting the cart before the horse.

I ought to have started with having new friends.

It had occurred to me that most of my friends, themselves unmarried at the time, had no such idiotic resolutions like restraint and good sense. Money, by the definition of one of them, was a medium of exchange. It was not supposed to stay with you. You exchange it for something. Usually pleasures.

That’s another problem New Year resolutions encounter. Lack of social support and accountable buddies. How do I get social support for thrift when all the people around me are spendthrifts? Not an ice cube chance in hell or chastity in a bordello.

You must find social support. Someone who will hold you up to your resolution. Sometimes quite annoyingly. When I want to order pizza, my wife would remind me that pizza is anti weight-loss. She would be on my case like an ancestral curse:

On the other hand, maybe you don’t need an accountable partner.

Anyway, I hope you achieve your resolutions for 2018. The good ones. Not the ‘get-rich-or-die-tryin’ one. If you died trying, where will you spend all the money?

2 thoughts on “Why New Year resolutions are so damned hard to keep.”