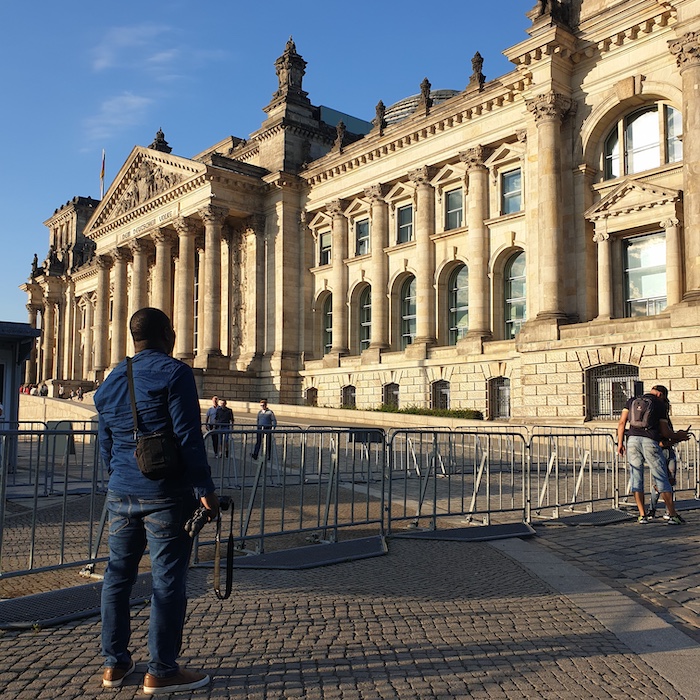 It feels ridiculous to wake up at 6:00 am to catch a train when you are on a vacation. But that’s what I needed to do if I was to catch my 7:00 am train to Berlin. On my tight European jaunt, every hour counts. I was going to be in Berlin for only two days. The earlier I hit the road, the more I could pack into a day.

From Amsterdam Centraal, I took the Deutsche Bahn IC to Hannover. There I changed unto the ultra-modern ICE Sprinter train to Berlin Hauptbanhof. Those Sprinter trains were mighty comfortable. And fleet! The whole journey was some minutes shy of seven hours. By far the longest train journey I’d been.

We crossed into Germany at the small town of Bad Bentheim. Sleepy me, I thought the town read ‘Bad Bethlehem’.

I arrived at Berlin Hauptbanhof at about 1:45 pm. ‘Hauptbanhof’ means ‘main rail station’. And what a station it is! A humongous glass and steel affair. A most spectacular modern architectural edifice. It spans five floors and is one of the busiest train stations in Europe. It sees over 110 million passengers a year.

A question; why do many Germans pretend they don’t understand or speak English? Many I approached for direction said they spoke spattering English, when in fact they spoke sufficient English to give me directions? I’m not asking them to explain Lord of the Flies in English.

Fellas, please leave me out of your beef with England. I genuinely need help!

On exiting the station, what should befall my eyes? 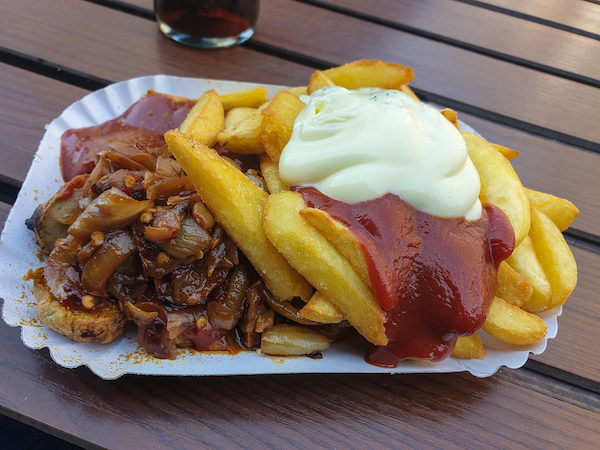 Nestling against an exit of the station was an imbiss, a snack shop that sold street food. If Berlin is the city for street food, then currywurst is its mayor.

I quickly got in line and ordered a fare. Pork sausage (or Bratwurst), ketchup, curry powder, fried onions, mayo and fat fries.

Oh Berlin, could this be love?

Easy. This was the capital of Hitler’s Nazi Germany. The fall of Berlin signaled the end of Nazi Germany and its reign of terror in occupied Europe.

A brief explanation of Nazi ideology.

The basic elements of Hitler and Nazi ideology were hatred of democracy, communism, and Jews. This was combined with a belief that the German people were superior to all other races. This warped ideology proclaimed biological inequality and the right of the “superior” German nation to dominate and decide the fate of the “inferior” nations. The way Hitler saw it, Jews, Slavs, Roma (gypsies) and blacks were at the bottom of the food chain and must be rid of.

This ideology necessitated the invasion and occupation of Europe, especially Eastern Europe, which Herr Hitler regarded as German “living space” – lebensraum. He therefore proceeded on the liquidation of the “peoples of the East.” The liquidation entailed reducing fertility, increasing mortality and outright extermination.

There. A brief history of what plunged the world into WWII. But let’s pause for a moment here.

Evolutionary theory infers that we are all beings of inconsequential existence. A mass of chemicals and impulses accidentally spawned by a swirling mass of gas. There is no purpose to our existence. We arrived here by chance and ‘natural selection’. The stronger adapted to its environment and survived. The weak died. In fact, the stronger ‘superior race’ must of necessity eliminate the ‘weaker’ and ‘inferior race for a progressive march in the evolutionary journey. That gave birth to the field of German eugenics – the genetic engineering to isolate and ‘breed out’ the weak and inferior race so they would not contaminate the superior gene pool of the Germans.

Further, in the atheistic evolutionary theory, there is no room for morality. No room for moral absolutes. Right and wrong are relative. The possession of morality may well be a handicap that prevents a species from advancing. Human lives have no intrinsic value. No transcendental qualities.

Which, when you think about it, may not be a ridiculous idea. After all, you have come across many cows that can play a concerto, write books or code in Python. I am beginning to suspect that all that Neil Armstrong “one-small-step-for-man-one- giant-leap-for-mankind” business may well have been a misattribution. Clearly, it was Matilda the Cow who first stepped on the moon and what she probably said was “one small step for a cow, one giant leap for all ungulates.”

Embedded in evolutionary beliefs are the roots of racial discrimination, subjugation and death. Thought you should know what you are signing up for when you gush over evolution.

Of particular interest to me in Berlin was the Memorial to the Murdered Jews of Europe, also known as the Holocaust Memorial, the Topography of Terror, the Mauermuseum, and the remnants of the Berlin Wall.

Well, those places in addition to food and photography. I had only two days to spend in the city so my itinerary was cramped.

But what were my first impressions of Berlin?

I’m sure you can swear that you’ve eaten some wicked kebabs in your life. And you may very well have. But if you have not eaten Doner Kebabs in Berlin, well, you haven’t lived! 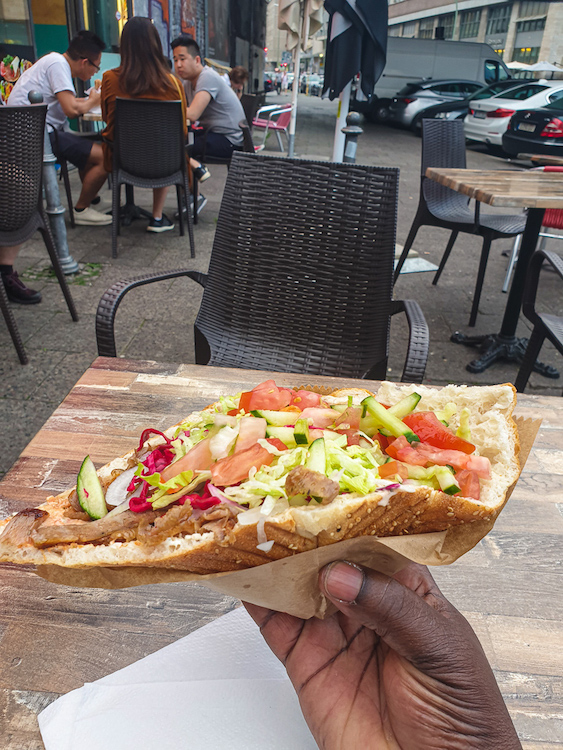 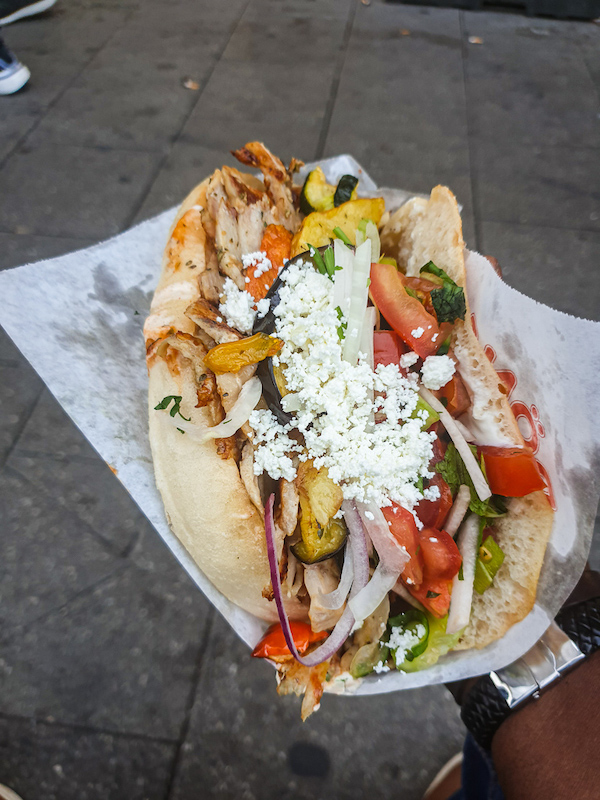 At this point, you may think that this Jide bloke is besotted with food. I can’t tell you what to think. What I can tell you though is this: Only the living eat, people. Only the living.

But I digress again.

The Holocaust Memorial is a memorial to the Jewish victims of the Holocaust – the Nazi mass execution of Jews, Roma, Slavs and other nationalities. It consists of 2,711 concrete slabs erected in a grid pattern on grounds that slope. The memorial looked like a cemetery to me although the designers of the memorial say it is not.

Next stop was the touristy Brandenburg Gate and the Reichstag. Holocaust stories aside, I was still a tourist and touristy things are well in order. I wandered around the Mitte district a bit.

In Germany, the chairman of the executive council or cabinet in many towns and cities is known as the ‘Burgermeister.’ But let me be clear, I was not in Berlin to meet politicians. The Burgermeister I was looking for is the Burgermeister. The famed burger joint in Berlin.

I sought it. I found it. It was located under a subway in the artsy Friedrichshain-Kreuzberg district. In an old disused public toilet from the 1920s (how cool is that!).

I quickly got in line (there is always a long line at the Burgermeister). I ordered the chili cheeseburger and fries.

I took a deep breath.

I lifted the burger towards my mouth. 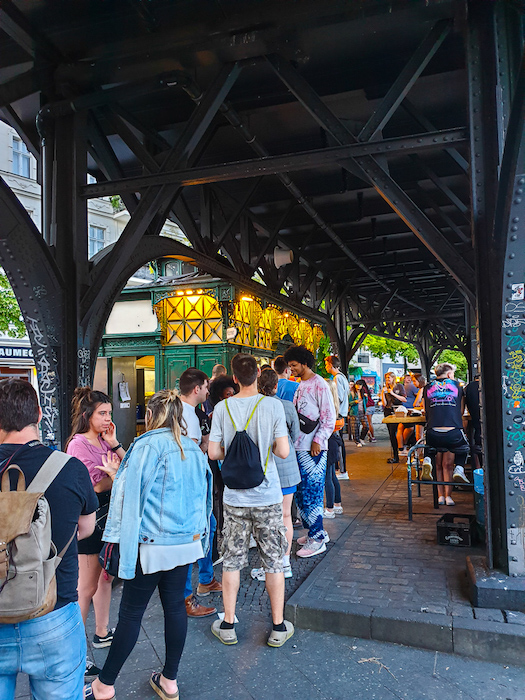 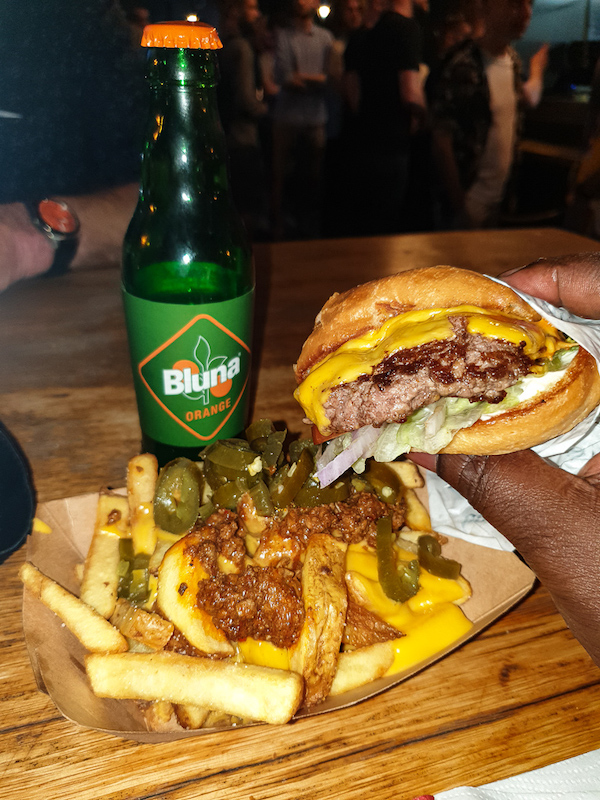 The next day, it was time to visit the East Side Gallery, the Mauermuseum and the Topography of Terror.

The East Side Gallery is an open-air gallery of frescoes painted directly on 1.3km-long remains of the Berlin Wall (you do know about the Berlin Wall, right? Right?!) It sees over 3 million visitors each year.

The Mauermuseum is just across Checkpoint Charlie (don’t tell me you don’t know about Checkpoint Charlie!). It gave insight into life in the Soviet-run ‘German Democratic Republic’ or East Germany. I saw exhibits of the dangerous and brave measures East Germans took to escape to a better life in Allied-run West Germany.

The Topography of Terror is both an outdoor and indoor Nazi Germany history museum. A very long segment of the Berlin Wall in its original state is also visible here.

In all, I had a very enjoyable stay in Berlin. I liked the place. I felt welcomed. I could have been Herr Alade from Roundtheblockdorf. Maybe if I stayed longer I would see the ugliness inherent in every city. But as far as this trip went, Berlin was aces. I will be coming back.

I’ll leave you with more pictures and memories of Berlin below. 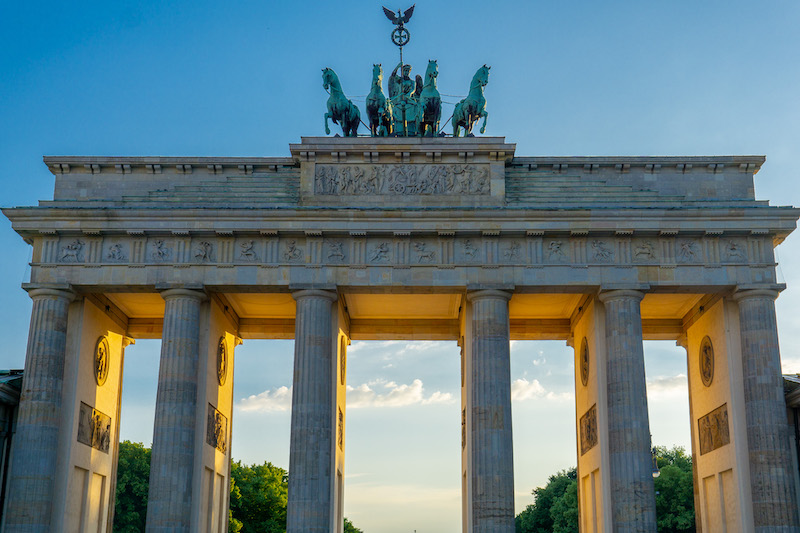 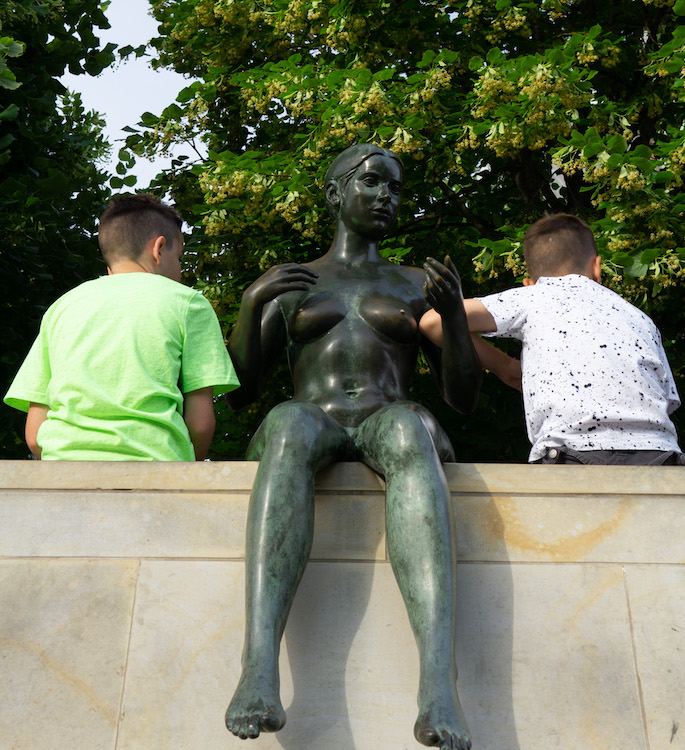 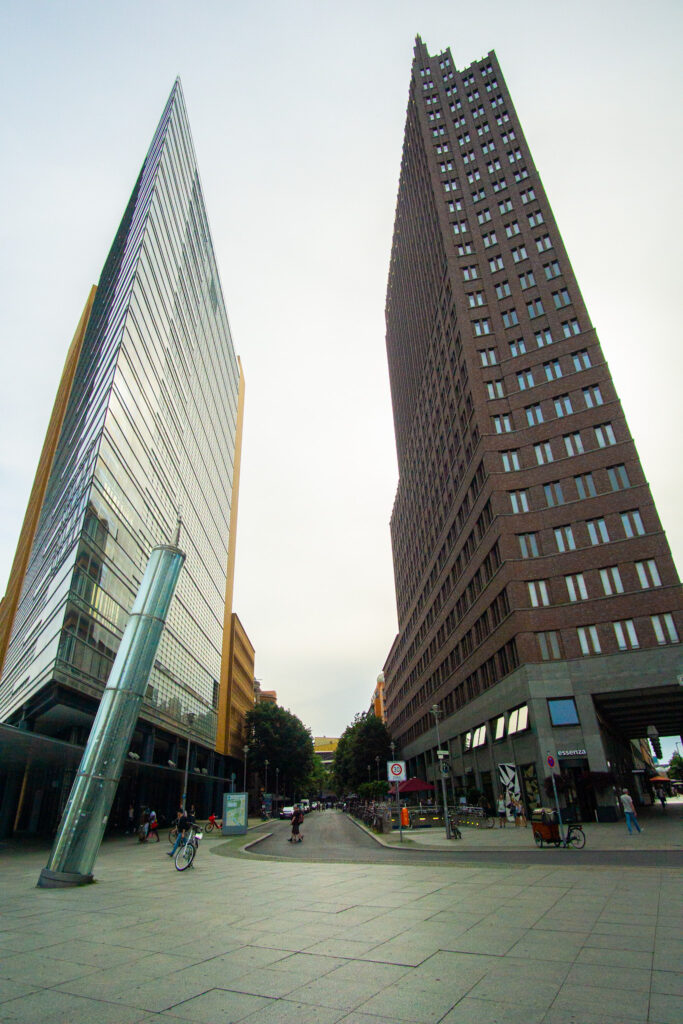 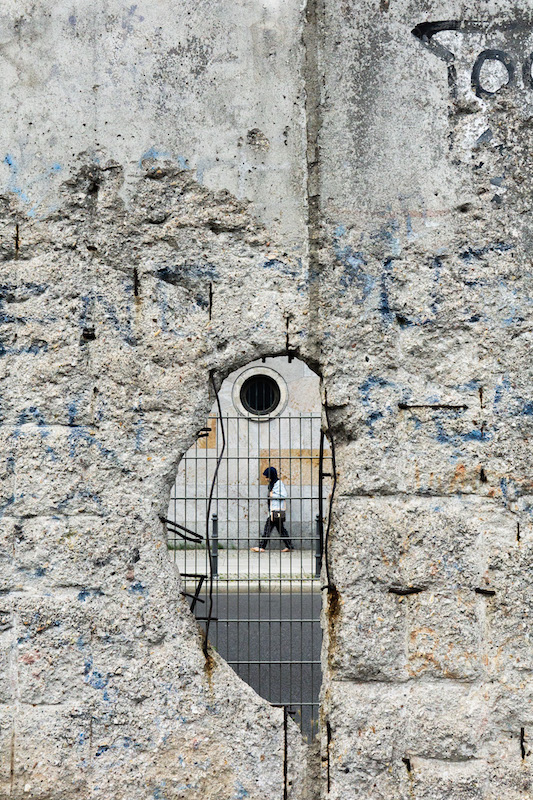 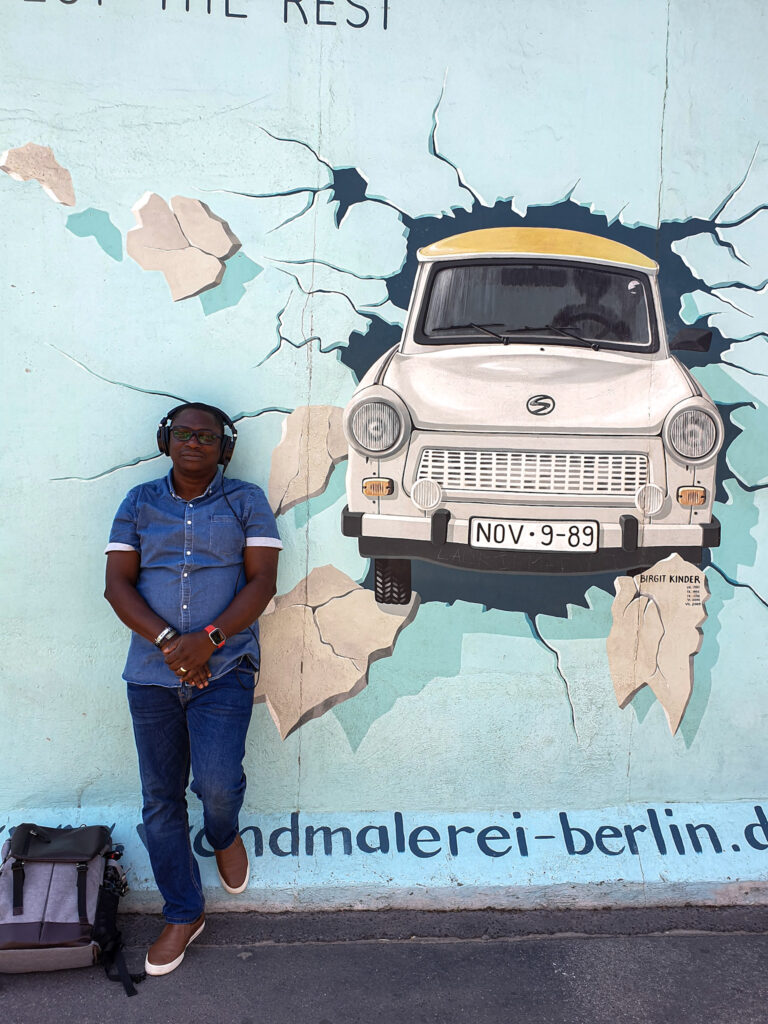